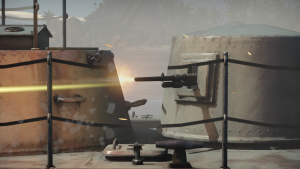 Considered a very weak, low-calibre machine gun, the Type 38 pattern 1907 (6.5 mm) primarily fulfils a support role when needed. Even when used in pair it's a rather impotent weapon, most of its value is in a psychological effect, as the player taking hits will constantly see shrapnel from hits, markers from inflicted damage and clearly visible bullets hitting the vessel. Even if the unit is not destroyed, often it's enough to deter opponents from continuing attack or cause them to take unnecessary precautions not realizing the small calibre of rounds they are being hit with.

Type 38 has the lowest calibre of all the comparable machine guns, and at the same time one of the lower rate of fire, however it has the best penetration. While bulk of the boats in a comparable battle ratings do not have any protection for that to matter, as they're built from a relatively thin wood, there are few exceptions, such as S-100's cockpit and rear gun shield.

This particular machine gun is used only on a single unit, therefore it's usage in battles is highly determined by the particular unit. The weapon is mounted on two armored turrets with a horizontal guidance of ±146° and ±148° for front and rear respectively, which is excellent, offering very wide fields of fire where both guns can be used simultaneously. While weapon's designated role is anti-aircraft, its vertical guidance is only -10°/+25°, which is unusually low for an AA (to compare: Type 92 on Mutsuki has a vertical guidance of -10°/+60°), realistically making it primarily an anti-naval weapon And in such a duty it's a decent weapon, even if an individual shots have a low damage, overall two guns from a relatively small turrets, able to independently guide targets are always a welcome addition to any boat.

Type 38 machine gun (三八式機関銃) was introduced in 1905 for the Imperial Japanese Army. It was a license-built variant of an imported Hotchkiss M1900 (Mitrailleuse Hotchkiss modèle 1900, which itself was adapted into IJA service in low numbers as the Type Ho).

This weapon saw combat use in the Siege of Tsingtao and further up till 1940, including the China Incident, as a second-line weapon. In front-line use, it was replaced by the 6.5 mm Type 3 heavy machine gun (三年式機関銃) introduced in 1914.

An empty machine gun without tripod had a total mass of 28 kg and a total length of 1.4 m. It was fed by 30 round brass strips, much like it's Hotchkiss predecessor, with a maximum firing rate of 450 RPM. Maximum range was 4,000 m, with an effective range of 2,000 m.