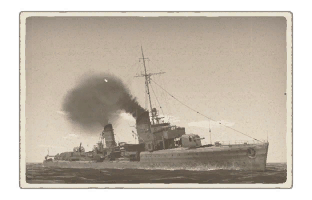 The Type 1924 Leopard, modernization of 1932 is a Rank III German destroyer with a battle rating of 3.7 (AB/RB/SB). It was introduced in Update 1.79 "Project X" as part of the fleet closed beta teat.

Some ships are fitted with weapons of various calibres. Evaluate the secondary armament and give advice on how to use them. Describe the ammunition available for the secondary armament. Provide recommendations on how to use them and which ammunition to choose. Remember that anti-air armament, even heavy calibre weapons, belong in the next section.

An important part of the ship’s armament responsible for air raid defence. Talk about the ship’s anti-air cannons and machine guns, the number of guns and their positions, their effective range, and about their overall effectiveness – including against surface targets.

The Type 24 Leopard was one of 6 ships produced as part of the Type 24 Torpedo boat lineup or the Raubtier (Predator/Carnivore) class. All 6 ships were commissioned in 1928-1929 and were produced at the Reichsmarinewerft ("Navy Yard") in Wilhelmshaven. Using electrical welding for construction, the ships also features 2 geared steam turbines with 3 boilers to drive the dual 2.35 meter propellers. The ships contained 13 watertight bulkheads Originally, the Type 1924 was planned to feature 12.7 cm guns, however, after consideration, the ships were produced with updated 10.5 cm cannons. The ships were used for a surprising amount of time, however, all but one ship was lost before 1942.

The leopard (the ship in game) was launched in 1928, and subsequently completed in 1929. In 1932, it was fitted with experimental 12.7 cm cannons prior to their use in the Type 1934 class destroyers. It served as part of the 2nd Torpedo Boat Flotilla. The ship was lost in a collision with the mine layer "Preussen" on the 30th of April, 1940