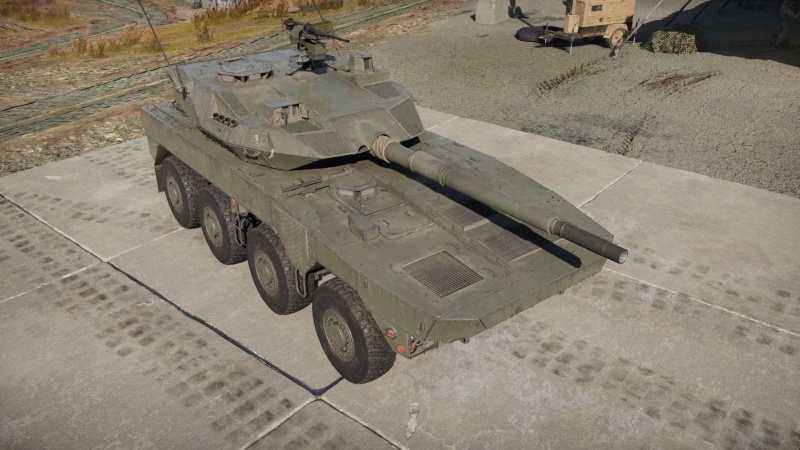 Referred by the JGSDF as the 16 MCV (Maneuver Combat Vehicle) and being the first wheeled assault gun of Japan, Type 16 offers a highly mobile gun platform for striking enemies from the sides while utilizing well-developed road network or in less-complicated terrain; thanks to its overall design, it can handle some punches from enemy autocannons and further enhance its survivability.

Even as a lightly armoured wheeled manoeuvrable combat vehicle, the Type 16 is rated to stop up to 30 mm autocannon shells; at up to 130 mm at LFP, quite good among most wheeled assault gun at its tier. This will provide enough defence against machine guns and autocannons but won't stand up against the common APFSDS shells that will be at this tier.

Further defence on the Type 16 will come in the form of smoke grenades, smoke shells, and a laser warning system providing intel on being targeted by a long-range tank readying up a shot which the driver can drive out of and lasers from helicopters setting up a missile that can be blocked by smoke.

The primary armament of the Type 16 MCV is a 105 mm JSW cannon, derived from the L7A3 much like many other NATO vehicles. It features the standard selection of APFSDS, HESH, HEAT-FS, and smoke, in addition to the Type 93 shell, one of the better APFSDS at this rank. While you will struggle against top-tier main battle tanks from the front, your gun is very effective against everything else. The HEAT-FS is especially effective against lightly armoured vehicles - it will often overpressure where the APFSDS will not deal sufficient damage.

When fighting MBTs, you should try to get side on shots. The Type 93 APFSDS will struggle against most top-tier MBTs from the front, but from the side it will act like any other fin round. This is especially effective against "T-series" tanks like the T-64, T-72, and T-80. 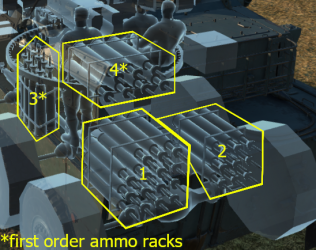 Ammo racks of the Type 16

The Type 16 has an additional 7.62 mm coaxial MG, like most tanks at this tier. It also retains the roof mounted .50 calibre HMG in the American style; this can be extremely effective against light tanks, especially Soviet light tanks like the BMP-1, BMP-2, Object 906, and Object 685. It will easily penetrate them from the side, allowing you to secure a kill if you've only knocked out their mobility.

Like most light tanks at top tier, you are extremely mobile and capable of pulling off some early flanking attacks on the enemy, weakening them and possibly slowing them down while your MBT allies crawl to your position and mop up any remaining enemy armour. Additionally, the Type 16 possesses an extremely good combination of optics: you have access to both thermals and night vision as well as a nice zoom of 4.0x all the way to 13.3x which makes it an excellent sniper. The Type 16 also provides you with a laser warning system/range finder combo package which makes it easier to tell if you have gained the attention of any enemy tanks during your expedition into the wilderness.

In RB, it is best to use your speed either to flank the enemy in order to snipe and scout them or reach a nice camping spot in hopes of delaying their advance, ideally near a choke point in the map where they will be bunched up and find it hard to manoeuvre once they notice you, slowing them down just a little bit more. You serve a vital role in matches as any amount of time the enemy team spends dealing with you they also spend ignoring your allies and the capture points, delaying actions should be a priority even above killing as a dead tank can respawn and head elsewhere whereas you need to waste as much of their time as possible, knocking out engines and damaging tracks as well as scaring them via destroying their barrel (which almost always leads to the enemy running back behind friendly lines so they waste time prior to repairing) is all fair game, the more annoying you are the more likely your team will have the time needed to gain the upper hand and win. A final note, this vehicle can if needed brawl for a little while due to its lack of armour and the decently spaced crew layout but it should be your last resort both due to overpressure being an extreme danger and the fact that other light tanks like the BMP family will chew through the sides of the Type 16 with ease and quickly knock out the crew in close quarters. If at all possible, avoid brawling and use your speed to reposition and continue the fight at a distance. On city maps, try to run and get behind the enemy for quick ammo racks and engine fires.

In AB, your ability to flank is hampered by the different visibility mechanics, so it may be best to put lots of obstacles such as buildings or terrain between you and any enemy tanks while driving around the map in order to avoid this issue until your ready to strike. If the map lacks such terrain features, then you can also resort to acting as a support vehicle and stay with your teammates, using them as armour and providing fire support in addition to providing help with repairing all the breaches that are often damaged during top tier battles. Finally, being a scout tank makes you rather ideal for air support so whenever possible (and when it's safe) use it to help out allies in other parts of the map, your tank is fast but it can't be in two places at once, the air units you bring in can fix that little problem and can provide the much needed assistance your allies were lacking leading to a higher chance of winning the match.

Japan, an island country that is composed by 4 major islands (Honshu 本州, Shikoku 四国, Kyushu 九州 and Hokkaido 北海道), Ryukyu Islands and many mountain ranges throughout the soil, where this become a double-edge sword for JGSDF- while it could delay enemies' assault, this also hindered JGSDF's deployment flexibility as this would require their tanks to be deployed via tank transporters and being dismantled to fit weight limits set by MLIT (国土交通省). The new challenges since 21st century also called for a vehicle with high mobility in view of the worsen international relationships.

This is where the 2014 National Defense Program Guideline came into play: the Guideline requires JGSDF to establish a new mobile unit that replaces all tanks on Mainland Japan and could be airlifted by the new Kawasaki C-2 transporters (Part II and III of the guideline). Earlier in 2000s, the new vehicle was under theorization and been confirmed for development in 2007 where Mitsubishi would become the main contractor for the new vehicle.

Developed by the Technical Research and Development Institute (防衛省技術研究本部; TRDI), the 1st prototype was completed in 2010 for static and firepower tests while the 2nd prototype with powerplants were built later in 2011; 2 additional prototypes were built throughout the early 2010s and the 1st prototype was publicized in 9th October, 2013. Later tests with these prototypes were done since 2014 and the 4th prototype were deployed in Narashino (習志野) for the 1st Airborne Brigade （第1空挺団）in 2016; then the new vehicle was approved as part of the FY2016 defense budget for 36 vehicles, as the Type 16 Maneuver Combat Vehicle. As the defense program scheme ordered for 99 vehicles for the aforementioned mobile unit, subsequence orders for the remaining vehicles were given in 2017 and 2018 (for 33; 18 vehicles respectively), serving as part of the Fuji Armor School's unit and the equipment for new or reformed recon units in JGSDF.

In the early 2000's, Japan sought to develop a new combat vehicle to extend the operational mobility of their armoured units. Furthermore, the new vehicle was supposed to counter the limitations of existing tracked vehicles, be able to rapidly respond to emerging threats in the event of an outbreak of hostilities and possess the ability to be airlifted or ocean transferred to more distant areas of operations, such as the Japanese island of Okinawa.

Thus, in 2007, engineers at Mitsubishi began development on what would become the Type 16 MCV. To satisfy all the requirements, it was clear from the onset that a lightly armoured, yet highly mobile and well-armed wheeled vehicle would need to be developed. Already, by 2008, the order for four prototypes was issued, with deliveries going on until 2013.

Army trials of the vehicle went on until 2016, when after successfully passing them, it officially entered service with the JSDF under the designation "Type 16 MCV". Production began in the same year (2016), and is still ongoing today. Presently, around 100 Type 16 MCVs have been built and commissioned into service, with no units seeing combat action thus far. 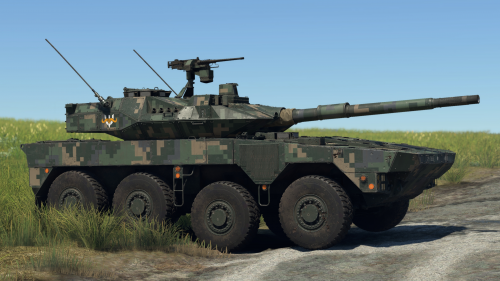 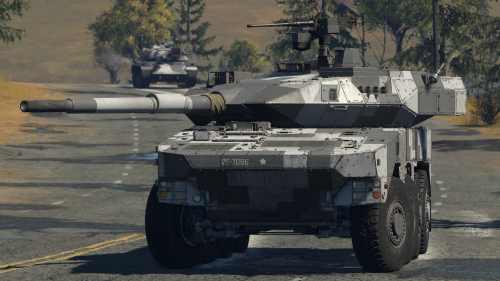