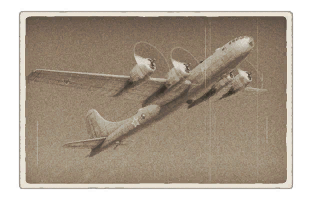 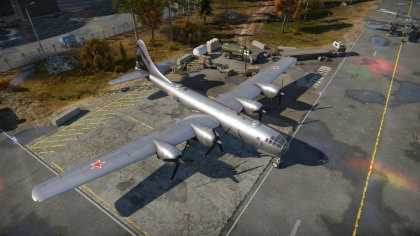 The Tu-4 is a rank IV Russian heavy bomber with a battle rating of 7.7 (AB/SB) and 8.0 (RB). This bomber was introduced in Update 1.59 "Flaming Arrows". Though it's an almost identical structure copy of the American B-29 bomber, the Tu-4 features an improved 23 mm defensive armament and a very large payload.

Russian engineers reverse engineered an interred B-29 to develop an "exact" copy per Stalin's request. Challenges were met as available materials were developed using the metric system and the B-29 had been developed using the standard imperial system. Equipment had to be retooled and new supplies had to be developed to match the metric version of the imperial standard sizes. In the end, between the two aircraft, the Russian Tu-4 only weighed 340 kg more than the B-29, a difference of less than 1%. So stringent was the bureaucratic process for manufacturing parts and equipment, special permission from a high-level general was required to allow Soviet-made parachutes to be utilized in the Tu-4.

The Tu-4 is a heavy bomber, able to load up to 12,000 kg of bombs. It is able to fully destroy all three bases in one run, while also dealing significant damage to the enemy's airfield. Its defensive armament consists of 5 x turrets with each having 2 x 23 mm cannons (a total of 10 x 23 mm cannons). These guns can annihilate enemy fliers in seconds while covering a wide area, making a Tu-4 tough to approach, let alone attack. However, don't be fooled, it is a huge target and thus nearly impossible to miss. With its battle rating of 8.0 in RB, it faces top rank jet fighters most of the time.

The Soviet Tu-4 strategic bomber is a copy of the B-29 with more powerful engines and armament. The USSR did not possess strategic aviation capacity in 1945 while having a great requirement for it as the Cold War was about to begin. The B-29's that ended up in the hands of Soviet engineers seemed to be a technological miracle and a vast gap between the long-range bomber technologies of the US and the USSR was soon discovered. This leads to a hurried cloning effort while created the TU-4, a Soviet copy of the American bomber with a few modifications.