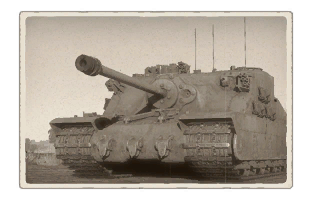 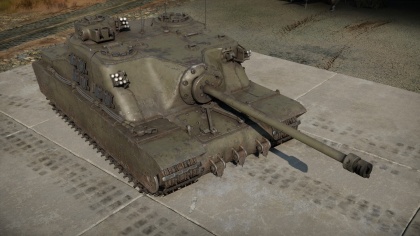 The A39 Tortoise is a Rank IV British tank destroyer with a battle rating of 6.7 (AB/RB) and 6.3 (SB). It was released along with the entire British tree line in Update 1.55 "Royal Armour". A huge casemate structure made as an assault vehicle akin to the American's T95, the Tortoise presents thick raw sloped armour with a unique heavy punching 94 mm cannon.

The Tortoise, as its name suggest, sacrifices speed to survivability.

Armour
With its cast 152 mm sloped armour, the Tortoise can survive most head on encounters. The area around the gun mantlet is 215 mm thick with a flat surface under the gunner's optics. It has a 55 mm plate (75°) under the gun and a 170 mm semi-rounded LFP. Sides are 152 mm thick. The engine deck's side armour is 101.6 mm thick with an asymmetry on the left. Rear armour is 100-110 mm thick flat plates. At this BR, there are not many tanks that can penetrate such thick material from the front. If used correctly, this vehicle should only get out of battles with a few 75, 88 and 122 mm scratches.

If, by any chance, an enemy gets through this massive steel casing, there is no less than 7 spaced out crew members to soak up damage. Most of the time, the AA gunner's cupola gets penetrated, since it is only 100 mm flat armour. AP (and APDS) shells will only disable the AA defenses while any APHE shell may incapacitate the driver and 1 or 2 loaders. If unlucky, it will detonate the massive ammo rack lying on the floor. Another common angle of attack is the machine gunner's port. Once again, AP shots will knock-out 2-3 non-essential crew members (machine gunner, commander, loader) and APHE shells may even eliminate the gunner. Sometimes, when getting too exposed, the 170 mm almost flat LFP gets shot at. This will usually disable the gunner, transmission and even ignite an ammo rack if there's enough explosive. A few highly penetrating tanks may shoot through the flat 215 mm surface underneath the gunner's optics. This usually means an instant knock-out for the Tortoise if it happens to be an IS-2, Tiger II (H) since there are ammo racks all around the gunner. Any penetrating hit to the side usually means an instant elimination (if not immediate, the following shot should be the last). The cannon barrel is often targeted by players: its large and thin muzzle brake tends to be damaged easily. Note that some large HE shells may tear through the top armour, wrecking havoc in the crew compartment.

Mobility
Such a great armour plays heavily on mobility. With a max speed of 20 km/h in both directions, neutral steering and wide tracks, this tank has good enough mobility to get into position and fire on the enemy. It is not advised to travel up to the frontlines since it will only expose weak spots, make flanking easier, and take a really long time due to poor max speed.

Firepower
Unlike other British Rank IV tanks, the Tortoise does not fire APDS or HESH ammunition, it relies on pure AP shells. Fortunately, these large caliber rounds are roughly similar to 20-pounder cannon's APDS, meaning the learning curve from the Charioteer Mk VII not too steep. Plus, these 94 mm shells are stock rounds in the A39 meaning they're free to use.

The secondary armament on this tank is an AA turret with twin-mounted BESA MG, good for dealing with low-flying planes and even some bombers, although these MGs lack the power of cannons for aircraft encountered in mixed battles at this BR. Since this turret is the main weak spot on this tank's frontal armour, it is often disabled in the first few shots. 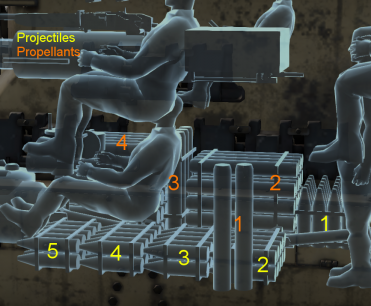 Ammo racks of the Tortoise.

The A39 Tortoise is the quintessence of British Heavy Anti-Tank line (mostly prototypes), which features vehicles such as the 3 inch Gun Carrier, basically, it is an upgraded design from the Churchill Mk VII bearing heavy armour and a good gun to support infantry against any threat while being able to withstand a few shots. One must stay at distances and snipe ennemies with the very precise 32 pdr OQF while allowing the enemy no chance to target weak spots. With it's slow speed and firing rate, this is not a frontline tank. It gets easily outflanked.

The A39 is a true tank destroyer in all senses: the longer the range, the better it performs. It moves slowly so it's not recommended for rushing the frontline, it plays much better as an entrenched shooter that can change a game by denying enemy presence in its arc of fire. Its only weakness is the lack of HE filler making general knowledge of tank internals a must as with most British tanks. With good gun depression, it's mostly invincible when hulled down and can retreat fairly easily due to good reverse speed and heavy mass allowing it to build up speed.

Here is a few tips for specific kinds of terrain:

Plains
This type of terrain is barely exempt of any structure, mainly, only a few hills will hide enemies. Maps such as Kursk, Mozdok and Jungle can be described as such. Find a good view on the battlefield and nullify any attempt from the enemy to move. Scout with binoculars (default key "G") and pop out to fire at any useful target. Peek-a-boo tactics are really good with this tank. Do not bother to move from position: the A39 can take many shots before going down. Reposition only if enemy line gets too close or if there is a flanker coming.

Urban
These kind of grounds are all about buildings, terrain variation is almost nonexistent. Maps such as Abandoned Factory, Port Novorossiysk and Advance to the Rhine are urban battlefield. This is the most tricky scenario to face with the Tortoise. Pick an alley and cover it from one end or ambush near a capture point, if feeling lucky. Always try to stay near allied cover.

Rural
Rural maps are a mix of the two former: a small urban map surrounded by plains. Maps such as Fields of Poland, Eastern Europe and Normandy are rural environments. Stay around the town and never get in, cover alleys from afar, make the enemy fear to turn any corner. Try to get as far as possible to the town and keep an eye for flankers.

Mountains
These maps feature high terrain deformation with steep hills and even walls. Maps such as Ash River, Karelia and Frozen Pass falls under this designation. Use the same tactics as with plains while being extra careful since flanking is easier on these kind of maps. Stick to the rear of allied armour or play as a bullet magnet, leaving light tanks a way to flank the enemy without getting too much attention. Make sure to hide weak spots behind props such as rocks or walls, leaving only the gun mantlet exposed.

The British began to develop a new type of vehicle to counter this threat, the "Assault Tanks" that focuses all effort on armour. The first development for such a tank began in 1943 as the A33 Excelsior tank, though this was cancelled with better reliability of the Churchill infantry tank. The Secretary of State for War and the Minister of Supply sent out specifications for the "Assault Tanks" in April 1943, to which the Nuffield Organisation react with 18 designs for the specifications between May 1943 to February 1944, named AT1 to AT18. Each design was more armoured than its predecessor, but design AT16 was approved by the Tank Board in February 1944. It was proposed that 25 vehicles would be produced and thus work began throughout the rest of the war. Six units were produced before production came to an end.

The AT16 was renamed the A39 Tortoise Heavy Assault Tank during its production life. The Tortoise is a fixed casemate design. Though classified as an "Assault Tank", it was in reality a self-propelled/assault gun. The fixed casemate superstructure limited the gun traverse, but the front armour is very thick at 225 mm. This large amount of armour came at the increased weight of 80 tons and a height of 10 feet. The gun is the 96 mm 32-pounder gun that provided effective explosive and armour-penetration capabilities, good enough to destroy a Panther tank at 1,000 yards away. The Tortoise is powered by a Meteor engine with a all-speed transmission system for equal speed forward and reverse. The suspension is a bogie system, with each bogie having a pair of wheels that are linked to a transverse torsion bar. The vehicle holds a crew of six people, two of which are loaders for the 32-pounder gun.