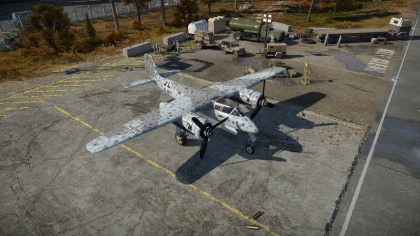 The Ta 154 A-1 has very powerful frontal armament, placed in the fuselage, which can give you quick and easy kills. Unfortunately, it doesn't turn very well at low speeds so it is recommended to keep your speed up and Boom & Zoom. Turning should be a last resort. If you try to get an edge in a turn-fight using your flaps, you should watch your speed as your flaps can break off very easily at speeds above 450 km/h (279 mph). The roll-rate of the Ta 154 is almost as good as the Fw 190s roll-rate, this is due to the fact that there are no fuel tanks in the wings. This advantage can and should most definitely be used when flying evasively but when at low altitude, do periodically check what's in front of you.

Climb with your cursor pointing at 15 degrees. If there are high altitude interceptor(Most commonly P-61 and Whirlwinds, note that they will typically have a higher altitude than you), destroy them if you can. Destroy the bombers that choose to fly high. If there aren't any remaining in the area, try using boom and zoom to destroy fighters that are likely going to be lower than you.

MEC usage guide
This plane doesn't differ a lot from the Bf 109s and Fw 190s regarding usage of Manual Engine Settings.

Prop pitch: unless you really know what you're doing, don't even dare to think about using it.

Radiator: radiator can be set at 30% for a long time but will eventually have to be changed to 40-50% as the engines will start to overheat continuously. While this happens you will be forced to use WEP less as the match progresses unless you stop using MEC for quite a while or land and repair which will reset this. Radiator can be left at around 40% for winter maps, 50% for spring/fall maps, and 60% for summer maps without much issue except for prolonged usage of WEP.

The Ta-154V1 prototype made its first flight on July 1st, 1943 with the Jumo 211F engine. A few days later, the V2 prototype with the Jumo 211N took off for the first time. In trials, the Ta-154 easily outperformed its rivals- Ju-388 and He-219. The Ta-154 reached at top speed of 700km/h or 440mph in testing. The V3 prototype was equipped with radar and a second seat for the radar operator and was consequently 75km/h slower than the other two prototypes with its heavy night fighting equipment. Nevertheless, it still had superior performance to the He-219.

In early 1944, the Jumo 213 engines finally arrived and a production run of 150 plus Ta-154A-1 models were ordered. Several were produced before the factory making the Tego-film glue was destroyed. As a result, the Germans substituted the Tego-film glue with an inferior type of glue. This inferior type proved to be complete garbage as several Ta-154s created with it fell apart in flight. Similar problems also beseeched the He-162 Volksjager. 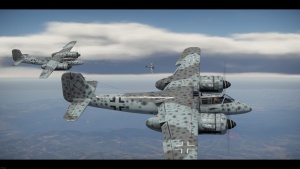