Difference between revisions of "Ta 152 C-3" 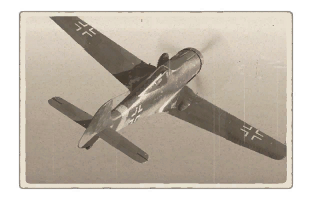 The Ta 152 C was designed for mid altitude combat, with a re-designed short wing similar to that of the 190 series, such as the Fw 190 D-13. With its Daimler-Benz DB 603 engine, gaining speed and altitude is the first priority in this aircraft. Second, is heavy usage of Boom and Zoom tactics, especially on heavily armed strategic bombers like the B-29 Superfortress. With its armament of four MG-151 20 mm cannons (two in the wing roots, two in the cowling), and a MK-103 cannon firing through the propeller hub, trigger discipline is a must to take down as many aircraft as you can with the ammunition on board. However, it can be pushed to turn tight in a pinch with a rather small amount of energy lost by using the flaps, and despite not having a proper combat flap setting. The flaps are extremely strong and they deploy quickly, even at higher speeds (though it is not advisable to do such thing unless the situation is just right).

Currently the Ta 152 C-3 does not carry any under-wing ordnance, but it can perform rather lethal ground-pounding with its MK 103 (30 mm) cannon, if it is loaded with armoured target rounds (HVAP), although one must aim carefully and have good trigger discipline to knock out tanks, or else one wastes too many shells on a single vehicle. But for its intended role, the combination of MG 151 20 mm cannons plus the aforementioned MK 103 is lethal against any aircraft in the game. However, the stock belts can be a bit of a pain to use, as half of the load are not the infamous German minengeschoße (HE-IT).

In 1944 the RLM made a ruling that new fighter aircraft were to include the chief designer's name in the aircraft’s designation. What was earlier knows as a Focke-Wulf aircraft was now listed with the prefix Ta which was short for Kurt Tank, though Tank was still working for Focke-Wulf at the time.