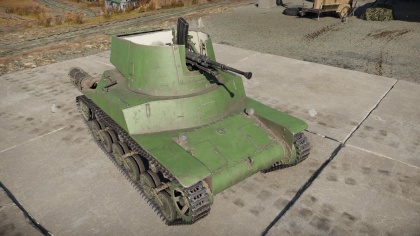 The Ta-Se is a Rank II Japanese self-propelled anti-aircraft vehicle with a battle rating of 1.7 (AB/RB/SB). It was introduced along with the entire Japanese Ground Forces tree in Update 1.65 "Way of the Samurai"

Load in your API-T belt, voilà !, you are now ready to hunt down tanks. As an antitank weapon, this canon really shines. With a slower rate of fire than its German counterpart, it is easier to shoot one bullet at a time with good accuracy. One can easily take out one ground target/magazine (provided you know where to shoot). Shoot the gunner first, the driver/engine to immobilise your prey and then finish off every other crew member by sniping them.

One big downside to being such a fast and versatile vehicle (both AA and AT) is that armor is light, very light, at an average of 12 mm. This means you won't survive any shot bigger than MG fire: play smart and always flank, strike fast and retreat at the littlest threat (arty, other enemy tank, strafing plane, etc.). Since two out of three crew members are located in the turret (with their head popping out of it), do not expect to survive any more than one shot.