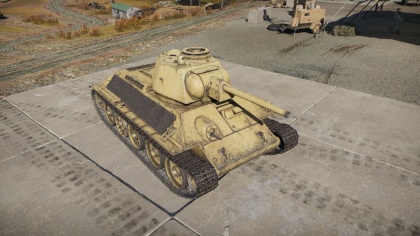 T-34 were bread and butter of the Red Army, just like IL-2s were for the Air force. But as Germans pushed on Moscow, many tank depots, repair stations and some factories were captured by the Germans who took the abandoned T-34 and played with them. During the testing, Germans realized that T-34 has few problems, which they tried to correct, and were somewhat successful. Few modifications were made, including the installation of the proper radio equipment since most of the tanks were lacking it(only command variants had a radio) and add on armor, which increased a protection, but Germans still didn't like them as much, due to poor view range and visibility, which was corrected by installing a German commander's cupola. Germans also had to pain them with large crosses and markings, so they don't get attack by friendly aircraft.