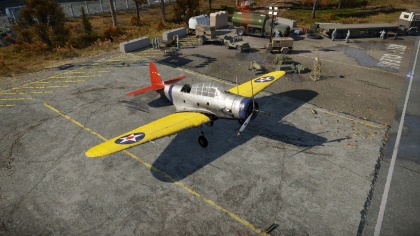 The first thing a pilot will notice about the TBD in gameplay is its "rubber banding" tendency to return to a stable speed of about 250 km/h. The aircraft has mediocre energy retention, especially in a turn or when coming out of a dive. However, it is a stable and easy plane to fly, even in Realistic Battles. Strangely enough, the TBD has awesome acceleration from a standing start. The acceleration peters off after about 140 km/h (just above its stall speed), but makes it a nice plane to take-off, especially from carriers. The armament on this plane is very bad and will get shot down if engaged with a fighter. The TBD is a very attractive target for fighters so climb to an altitude of 5000 meters. When dropping bombs, decrease your throttle to 50% as the bombs are more accurate when flying slow.

This aircraft is best used in a ground strike role, carpet bombing ground targets with a large quantity of smaller bombs available out of the box, and in this role it performs respectably. It features a single 12.7 mm MG attached to the starboard side of the engine, with a generous ammo load, but although the TBD has a good turning radius it is not recommended to engage as a fighter. A rear gunner also wields a 7.7 mm MG, and although its horizontal coverage is laughable, it is a welcome addition to a low-flying pilot with the ability to keep his enemies in his gunner's (or main gun's) sights.