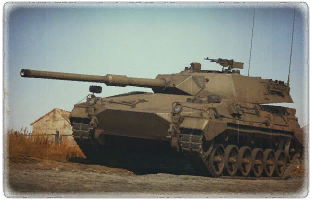 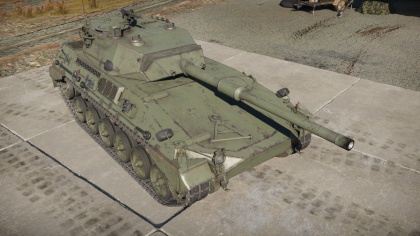 The Tanque Argentino Mediano (shortened to TAM, English translated as: Argentine Medium Tank) is a rank VI German light tanks with a battle rating of 8.7 (AB/RB/SB). It was introduced in Update 1.81 "The Valkyries".

It's arguably the best BR 8.7 tank that Germany has to offer, with slightly better mobility than the A1A1 and the ability to scout. The minimal armour and hullbreak detract from it though. Similar to the A1A1, it shares a horrible stock grind against the hordes of new 8.7 premiums, but holds its own very nicely once APFSDS is unlocked.

The front can defend against 12.7 mm machine gun ammo, but the side armour is only proof against standard machine guns of 7.62 mm. However, most enemies that can be faced will usually have a 12.7 mm machine gun or larger in their possession, making it so even a burst of bullets could riddle the TAM with holes. With this in mind, take caution when flanking a tank with a disabled gun to get a side shot, as you can easily lose a few crew members to machine gunfire. This becomes less of an issue after unlocking the APFSDS round when side shots are rarely as necessary.

The TAM also is hull-breakable, and so rounds that hit have a chance of instantly destroying the vehicle.

Mobility is not bad, with a max of 70 km/h on the road in both forward and reverse. Off-road mobility is quite average, especially on flat terrain, but there is a poor steering response.

The TAM is equipped with two machine guns with a total of 4,000 rounds.

The TAM could be played as an assassin, scout, or as a support vehicle on the battlefield. This variety of role is capable due to the powerful 105 mm cannon with an ammunition variety akin to the Leopard A1A1, at the same time the thin armour prohibits any head-on combat which encourages fighting behind the front lines or from the flanks. Keep an eye out as an enemy that can be faced will be able to destroy the TAM if they so much as get a bead on with their armaments.

The best way to use the TAM is to exploit the scouting ability to mark enemies on the map, then call in friendlies to do the heavy fighting against them. While the team keeps the enemy busy, take pot shots with the 105 mm to also pick off the enemy as their attention is diverted from the TAM.