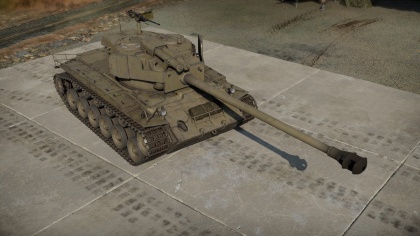 The Heavy Tank T26E1-1 "Super Pershing" is a Rank IV American heavy tank with a battle rating of 6.7 (AB) and 6.3 (RB/SB). The T26E1-1 was added with Update 1.57 "Battle March". The tank takes the basis of a normal M26 Pershing, then increases its armour with welded-on metal slabs and up-guns it with a T15E1 cannon, which is nearly identical to the one in the T32. This gives the tank a much appreciated armour protection and firepower for the battle rating and is comparable with the premium M26E1.

The T26E1-1 utilizes a very powerful 90 mm T15E1 cannon, nearly identical to the gun on the BR 7.3 T32 7.0. The gun's greatest weakness is its reload time, allowing more than sufficient time for the enemy to move out of their cover, aim, and take a shot. Therefore staying in cover between shots and near friendlies might be preferable. A mix of T41 APCBC and T44 APCR shells is recommended as a typical load-out.

For less mobile tank destroyers usually a mix shells is recommended, with Super Pershing being no different. For Arcade Battles, 15 shells is typically sufficient, with majority being APCBC with roughly 3-5 APCR shells dedicated to the enemies with a better armor. APCBC shell is a good default for a majority of targets, it typically should be loaded when venturing towards unknown.

The T26E1-1 is a slow, pretty well-armored Tank Destroyer, and should be played as such, keeping enemies in front, while friends on flanks. Its frontal protection is not that reliable, especially against long 88's, at the same time its very unconventional, giving a large number of smaller weak spots. Therefore, it's recommended to stay on the move, or even rotating turret left and right to increase chances of deflecting the shot. Unlike with T34 simply staying hull-down is not viable due to weak spots at top of the turret and bottom turret cheeks - it's best to hide an entire body between shots, letting allies lure the attention of the enemy team.

It's also one of the weakest tanks when played solo, owning it to low mobility, very weak side armour and a very long reload time. With 76mm it can be penetrated by every tank it encounters and a number of anti-aircraft guns. Therefore an additional situational awareness is required to always have allies in proximity, in fact: if need be, tactical retreats might be worth a risk, as if left alone a single hit without mobility kill on a hostile unit can mean a near-certain death.

As with every ground vehicle Parts and FPE are an absolute top-priority. Following that both types of shells should be researched. Either Adjustment of fire or Suspension should be researched as the second module in tier II, depending on play-style. If undecided - choose Adjustment of fire. Mandatory modifications in tier III are T44 shot and Crew Replenishment. After that: Filters -> Engine -> Transmission for improved mobility, in that particular order due to the efficiency in

RP/hp increase. Further modifications at will. Generally least important module are Tracks, though again - it might depend on a personal preferences.