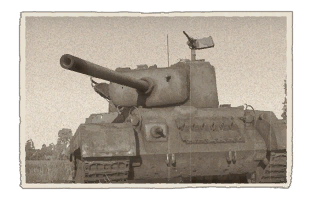 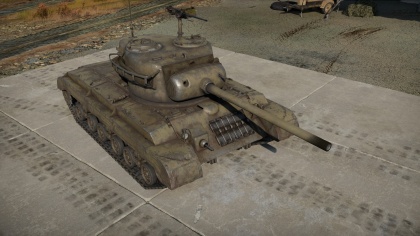 The Medium Tank T25 is a rank IV American medium tank with a battle rating of 6.3 (AB) and 6.0 (RB/SB). It was introduced in Update 1.53 "Firestorm". The T25 is, for all intents and purposes, a prototype M26 Pershing, with nearly the same design, turret, and gun. It comes directly after the M4A3 (76) W in the American medium tank line. 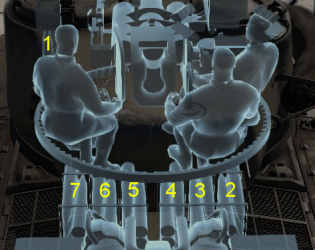 Ammo racks of the T25

The T25 is a medium tank, but the mobility can give the impression that it is a quick heavy tank when driving it. Its top speed is on par with the Comet, but it accelerates slower. The T25 is respectably mobile and is one of the first American tanks to have neutral steering, which allows for excellent and light low-speed handling and useful in tight urban maps. The T25's saving grace is the fact that it's got the 90 mm, on par to the Tiger's 88 mm gun.

When using this tank, use it as what it is - a medium tank. It has many of the very desirable qualities for a medium tank - containing elements of a tank destroyer, a medium tank, and a heavy tank into one powerful package. Its armour is above average, being on par with a Tiger I, because of it being sloped. When angled, the tank is extremely tough, but do not expect the armour to save the T25 every time - the common IS-2 is extremely dangerous. Its hide may be thick, but once upgraded, it can keep up with things like Panthers, but don't expect to win any running races soon! Its speed is what surprises many players, as American tanks are not known for their speed. This speed can allow flanking manoeuvres and to get to positions impossible for most American tanks. This leads into its tank destroyer capability - the part that makes the T25 very effective. It has access to the famed M82 APCBC rounds, which matches Russian tanks on post-penetration effect, owing to the round's massive 137 grams of explosive filler. And for good measure, it has the same penetration as a Tiger 1's 88mm APCBC rounds. It even has access to very powerful APCR rounds for it's BR, but the T25 will not usually need 260 mm of penetration. Its various qualities make it a jack of all trades, with its only weakness being mobility and thin side armour. The T25 gives a glimpse of American medium tank gameplay after the Sherman series.

After the M4 Sherman was adopted as the United States military's standard tank, work began on a new tank design to be the successor of the M4 Sherman. U.S. Ordnance Department got to work in spring of 1942, which would lead up to the T20 tank designs. The T20, along with its variants like the T22 and T23, were all marginal improvements over the M4 Sherman with a more powerful 76 mm gun, a rear transmission design, and having a much lower profile. While the Ordnance Dept. tinkered around with these designs with various components, the Armored Board rejected the few designs offered to them for being maintenance extensive, as well as not seeing a need to replace their abundant and well-suited M4 Shermans on the field. While the tanks were rejected, they did provide some technical upgrades to the current Sherman designs. An example of this is the horizontal-volute suspension system (HVSS)that eventually became the suspension of the "E8" Shermans such as the M4A3E8.[1] Another example is the T23 turret, which would become the main turret on Shermans mounting the 76 mm cannon on the "E6" program.

An experimental medium tank built at the Detroit Arsenal Tank Plant in January, 1944. Only two of them were ever built. They were never used in combat. One of the precursors to the M26 medium tank, armed with a 90mm gun and comparable armor.