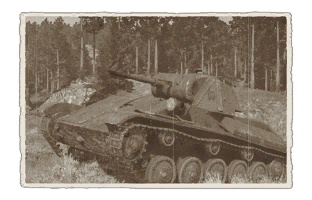 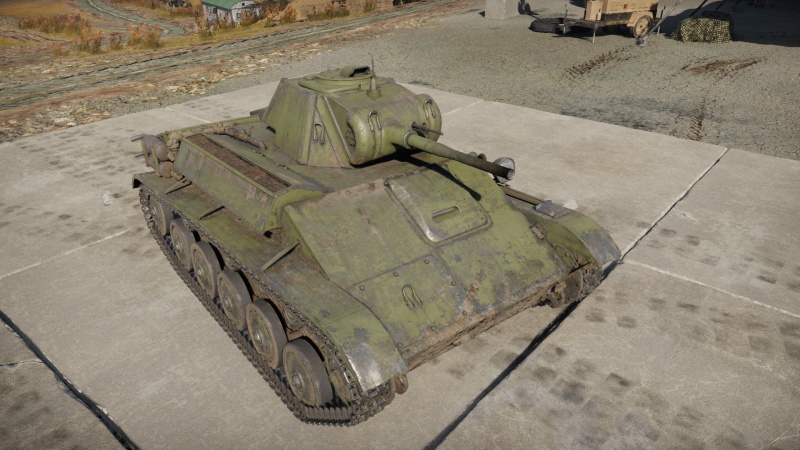 The T-70 is a rank I Soviet light tank with a battle rating of 2.0 (AB/RB/SB). It was introduced during the Closed Beta Test for Ground Forces before Update 1.41. The T-70 is a very good light tank for its rank location and should be taken seriously if seen on the battlefield.

This tank makes for a surprisingly good low-rank scout, and as an added bonus, can engage in front line combat when needed. The front armour is surprisingly strong and can bounce shots from several similarly low-rank opponents. The gun, while not the greatest, is very capable in combat.

The major drawbacks of this tank occur when it's engaged in urban combat, or against opponents with high penetration cannons. The side and rear armour is undeniably poor and combined with urban combat make it very easy to get flanked. This leads to the tank largest flaw, in that it only has two crew. One penetrating hit will usually be the tank's end.

Generally speaking in combat, stick to terrain with forests and hills. In these types of areas, the small stature of this tank can be used to hide it behind small hills, and use its gun for effective ambush attacks.

With sloped 50mm and 35mm on the turret and hull, the turret can take quite a beating and have sustained no lasting damage other than scratches on the glorious green paint. However, note that you only have 2 crew members in an extremely cramped crew compartment and, especially if your enemy has a tank of higher BR, you're unlikely to survive more than one penetrating hit. As like most tanks, the weak spots are the side and back but, thanks to our engineers in Stalingrad, the armor is also sloped, increasing the likelihood of bounces and non-penetration.

The T-70's forward speed is nothing impressive compared to the BT series, but it does help you get out of sticky situations and it makes enemies harder to aim at your weak points.

The T-70 has a decent cannon for its BR. Although it's the same gun as the BT-5 and it's at 2.0, it is still sufficient to penetrate common enemies. Stock round has a maximum penetration of 70 mm. Combined with the 29 g TNT, it is almost certain that the T-70 will frontally one-shot every tank it will see. Even at more than 500 m away from the target, it still has 40-50 mm of penetration which is still enough to go through a lot of tanks' frontal armour. The tank has 6 degrees of gun depression which is only enough for some terrain, so it should be avoided to get into a hilly terrain. The 5 second reload (stock) isn't the best for its calibre which encourages the player to aim carefully at weakspots and disable the opponent in one shot. When facing heavily armoured tanks like the B1 and Matilda, the researchable APCR becomes pretty handy, but remember to only shoot at flat armour up close since APCR rounds lose penetration over distance or when hitting angled armour. 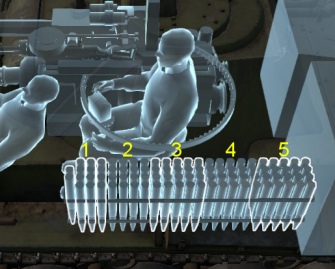 Unlike later tanks, the T-70 presents a strange configuration: motor and turret are sided by side, meaning that exposing the tank's back will not immobilize it. With its turret definitively leaning to the left, a smart player will prefer going around corners with the obstacle on the right side of the tank. This tactic has two effects: it decreases the size of the target for the enemy and protects the crew with the engine block, at the expense of being immobilized if shot from the right side. Try to avoid being shot to the left side since there is a big ammo rack on the whole left side of the vehicle.

Despite its inferiority, the T-70 had a few moments to shine. On July 6, 1943, Lt B.V. Pavlovich of the 49th Guards tank brigade engaged and destroyed four German medium tanks near Pokrovka village. On March 26, 1944, Sgt Alexander Pegov of the Third Guards tank army in a T-70 tank ambushed a Panther tank in a range of 150 to 200 meters with APCR rounds, setting it on fire. He immobilized another a moment later. The Panthers blocked a vital road as they were immobilized, and Pegov was decorated as a Hero of the Soviet Union.

This tank was adopted by the Red Army in 1942 as a replacement for the Т-60 and put into mass production in three factories at once. In comparison to the T-60, it had stronger armour, more powerful weaponry and a powertrain consisting of two sequentially paired six-cylinder petrol engines. The transmission and driving wheels were placed in the front of the tank. The hull was welded together from rolled armour plates, and the welds were strengthened with rivets. The frontal and rear hull plates were set at a sloping angle. The vehicle was equipped with a 45 mm Mod. 1938 tank cannon and a DT coaxial machine gun. It was not equipped with a radio set.

T-70 light tanks served jointly with T-34 tanks in tank brigades and mixed regiments. They underwent their trial by fire in June-July 1942, suffering significant losses. Their first battles revealed the weaknesses of the new light tanks in combat. Their weaponry was not powerful enough to go toe to toe with German medium tanks, and their armour was insufficient for the tanks to be used for direct infantry support. In addition, there were only two tankers in the crew, one of which was overloaded with numerous responsibilities, and the vehicles had no means of communication. All of this significantly weakened their value in the units they operated in and led to increased losses.

According to some tank commanders, the T-70 was ideally suited for chasing retreating enemies, a characteristic which became important in 1943. The T-70's powertrain and running gear were more reliable than those of the T-34. This allowed them to make long treks. The T-70 was a quiet vehicle, in stark contrast to the roaring engine and rumbling tracks of the T-34, which could be heard from up to 1.5 km away at night.