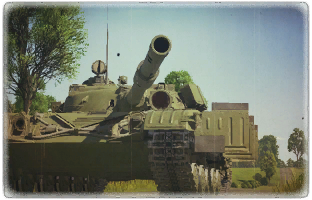 The T-64A (1971) is a rank VI Soviet medium tank with a battle rating of 9.3 (AB/RB/SB). It was introduced in Update 1.71 "New E.R.A.". The T-64A should primarily be played defensively, utilising terrain for cover and pushing carefully. It has good firepower, but mediocre armour, average mobility and a near non-existent reverse speed. The T-64A can be played as a sniper with one of the highest velocity rounds in game at 1800 m/s. Brawling should be avoided, as many of the vehicles it will face will easily penetrate its hull armour. Most vehicles it will face have better mobility, so it's important to be aware of flankers.

The T-64A presents a design that is reminiscent of some Soviet tanks seen in the contemporary period. The tank's overall colour scheme presents a default camouflage of the same dull green seen on nearly all other prior Soviet tanks.

It's key to keep the weaknesses of the T-64A in mind for the best performance of the vehicle. The 125mm gun is extremely powerful and will comfortably perform even against newer and better protected opponents, but in almost every other aspect the vehicle is lacking. Where possible, avoid exposing the hull at all - the easiest way to do so is to use a small defilade or terrain deformity. Sit back, be patient and allow the enemy to expose their weak spots. Most vehicles are faster than the T-64A, so expect hostile tanks to find their way to objectives significantly faster than you will.