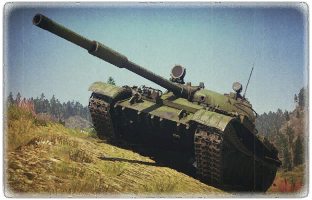 The T-62 is the first entry in the new stage of Soviet MBTs that most Soviet Tankers will research. As usual with soviet MBTs, only the turret has armor to speak of. Do not let this put you off as the T-62's 115mm U-5TS is able to preform exceptionally even with 10.0 BR tanks. In fact, the U-5TS has more penetration than that comes after the T-62, the T-55A, making a lot of players fall back to it (not to mention you lose the cool shell dump animation!). This comes at the cost of slightly slower reload time of 12.0s(9.2s if maxed crew), which is a little below average for it's BR. All in all, the T-62 will give Soviet Tankers a general idea of how to play upcoming MBTs, as the play style doesn't change much.