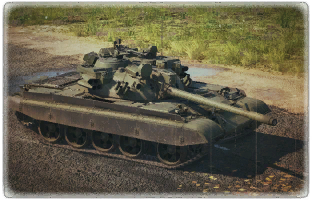 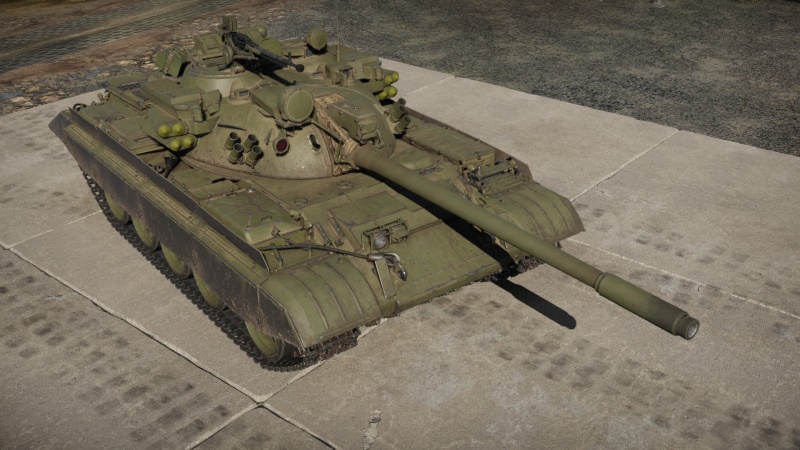 The T-55AMD-1 is a modification of the premium T-55AM-1 at the same battle rating. It has the same upgrades to the firepower, fire control system, engine, and hull armour compared to the original T-55A. However, what sets it apart is the "Drozd" hard-kill active protection system, a first for Soviet tanks. It replaces the add-on "brow" composite armour and intercepts incoming ATGMs with explosive charges. Because the turret is no longer capable of resisting contemporary tank guns, the T-55AMD-1 effectively trades turret armour for vastly improved protection against ATGMs, making it easier to counter IFVs and helicopters.

The armour is not legendary, it will rarely block a serious shot. However, it is very thorough, with no real weak spots. The T-55AMD-1 can take a frontal beating from larger autocannons without losing anything important.

The turret armour is not sufficient at this rank, nor at any rank from even rank IV upwards. The composite armour seen in the T-55AM-1's turret has been completely removed, however this grants access to the 'Drozd' hard-kill Active Protection System. The gun shield itself mostly offers a 110-160 mm protection, which is mediocre at the battle rating.

The frontal glacis is in two parts, the upper area that is 100 mm RHA sloped at 59 degrees and the lower one being 100 mm RHA sloped at 56 degrees. Both the upper and lower plates will not stop anything but SPAA munitions at the battle rating. The lower glacis plate is not as strong since it is not sloped as much as the front plate, but penetrating this plate will often result in colossal damage.

Hull additional armour remains with its effectiveness against chemical munitions. The hull, however, is unlikely to stop penetration of most ATGMs. Also, it is noted that there is a fuel tank in the front of the tank protecting the ammo rack, which sometimes penetrating rounds will just set afire. The difference compared to its counterparts is that this rack is the first-stage rack, meaning there is no way to empty it to increase survivability. This is one of the main problems of post-war era Soviet MBTs. The composite armour offers a really good protection for chemical energy penetrators such as HEAT-FS, ATGMs and anti-tank grenades, having a protection of roughly 400 mm. This makes the tank capable of withstanding hits of almost all HEAT-FS of the BR (most of them penetrate between 320 mm to 430 mm) and even some ATGMs (between 400 mm to 650 mm). It is also able to reduce the penetration or stop ATGM like the 9M113 Konkurs (ATGM of the BMP-2) and 9M112 (ATGM of the T-64B) although do not expect it to happen all the time, it depends on your angling and where the missile impacts. The chassis should be angled most of the time to maximise the effectiveness with the 100 mm thick steel plate, capable of making the armour reach 703 mm of effective armour against CE penetrators. 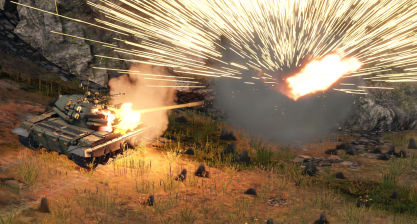 The T-55AMD-1 has access to a hard-kill protection system, the Drozd APS. It is a constantly active APS which provides protection against a wide variety of threats. It is composed of three major pieces: a Doppler radar array for target detection, eight launchers (four per side) on the sides of the turret, and an electronics piece on the turret's rear. It detects targets inside a 60° frontal arc and engages them inside a 7 m distance. The main disadvantage of this system is that it follows the direction of the turret, meaning it can only successfully destroy targets that in the line of sight.

Drozd can be used while on the move (although the turret must be facing the target as stated before). While on the move (especially horizontally), the detected ATGM has a risk of escaping the activation range of the Drozd. When moving towards an enemy who fired an ATGM, it will be affected by the APS but due to momentum, the ATGM can still damage the T-55 if when destroyed. Drozd must have a clear line-of-sight with the enemy threat (at least APS must be exposed). It should be noted that the T-55AMD-1 has no access to a Laser Warning Receiver (LWR), so the player must rely on visual contact with the ATGM and the launcher (no LWR makes the helicopter lock-on invisible). Thankfully, the usual attack angle of enemy projectiles are inside the protection arc when in LOS.

Do not be afraid to trust your armour, particularly when hull-down or against autocannons. However, avoid straying from your allies, as your reload can mean that a missed or poor shot is fatal. Do not count on knocking out crew to cripple opponents as your reload is long enough for knocked out members to be replaced. If you are reloading while under fire, remember to keep your gun moving to evade shots at it. The combination of APS and reliable armour means that IFVs such as the Begleitpanzer, Bradley, and Marder can do little to you without catching you off guard or getting a luck shot on your gun.

As one of the top-secret projects of the Soviet Army, the Kompleks 1030M-01 "Drozd" was the very first operational active protection system (APS), developed by Vasily Ivanovich Bakalov of the KPB Design Bureau as a counter to the abundance of RPGs and ATGMs. This project was first started by the Army but was dropped due to budget constraints; the Marines later completed the project as a cheaper alternative to ERA or new T-72 tanks to replace their T-55As. Around 250 of their T-55As were then converted to the AD standard by 1983. The version of T-55AMD-1 in-game was based on the enhanced T-55AM-1 with better engine (V-46-5M at 691hp), and new radio and fire control systems.

According to combat records during the Soviet-Afghan War, the system's interception rate was at around 80%; but the system itself also has some drawbacks such as being lethal to unarmoured friendlies in its frontal firing arc (later models installed a warning buzzer), and a very long reload time at around 15 minutes.

After the dissolution of the Soviet Union, some of these T-55ADs were in the hands of Ukraine and the system was reinstalled onto other tanks, while the remaining ones in Russia were stored elsewhere as reserve forces.