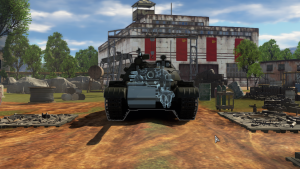 The T-55A cannot turn in neutral gear, which makes it difficult to manoeuvre in close-quarter encounters, which often occur in the cities. The acceleration is good, the T-55A can get to 25 km/h from a standstill on flat, rough terrain in a few seconds, and turning is decent on flat ground.