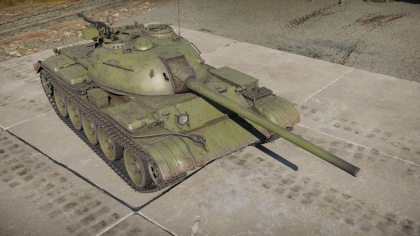 Ingame, the 1951 model plays similarly to the 1949 model. It has the same reduced hull armour compared to the 1947 model but makes up for this with its better mobility and turret, which is not vulnerable to shot-traps like the 1947 and 1949 models are. The 1951 model also has access to a powerful HEAT-FS round. 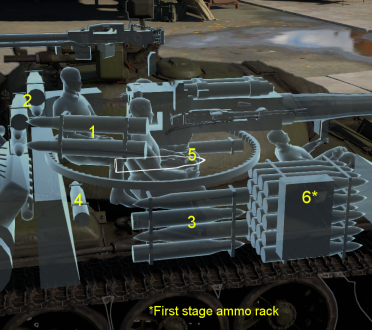 The T-54 '51 is practically the same tank as the T-54 '49, it has the same armour as the T-54 '49 and the only difference is the addition of the new HEAT-FS round capable of going through 380mm of armour (the War Thunder community generally accepts the T-54 '51 as having the best ammunition overall). Again, the new round should be taken as a back-up option for the most armoured enemies, while BR-412D should remain the main round.

When grinding the first modifications, Arcade Battles might be more fun, because of faster-paced gameplay and the ability to see all threats. Now, it's a priority to research Parts and FPE, and it may also be a good idea to activate 3-5 universal vehicle back-ups to be able to respawn twice in one match. In this case, it's worth it, because the T-54 '51 is a grinder for rank V and first rank VI vehicles - the faster you spade it, the faster you can grind!

General tips for the stock grind are the same as those for the T-54 '47, read that article.

After Parts and FPE, the player should focus on mobility upgrades or the Horizontal Drive modification, since both mobility and turret rotation are limited when the tank is stock. Also, the 3BK-5 HEATFS shell greatly increases the tank's damage output, and should be considered quite important as well.

In total, 7,009 of them were made between 1952 and 1955. The T54 Mod. 1951 became widespread outside the USSR's borders and was licensed for production in Poland, Czechoslovakia and China. Its Chinese variant was designated Type 59. Tanks of this type were used in a multitude of armed conflicts in the 20th century. These vehicles are still in service in many countries in Asia and the Middle East.

A disadvantage of the tank was the hull layout is inherited from the T-44. It ensured the Soviet tank's advantages over its foreign counterparts, but also restricted opportunities for further increasing the tank's defences, particularly against the new 90 and 105 mm high-explosive anti-tank warheads and armour-piercing subcalibre rounds. The unstabilised tank cannon's accuracy and rate of fire were too low when firing on the move. The T-54's transmission and undercarriage restricted opportunities to increase its mobility after installing a more powerful weapon or increasing its armour.