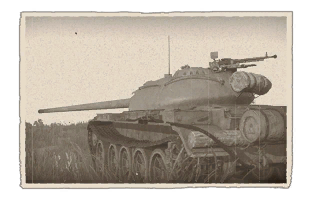 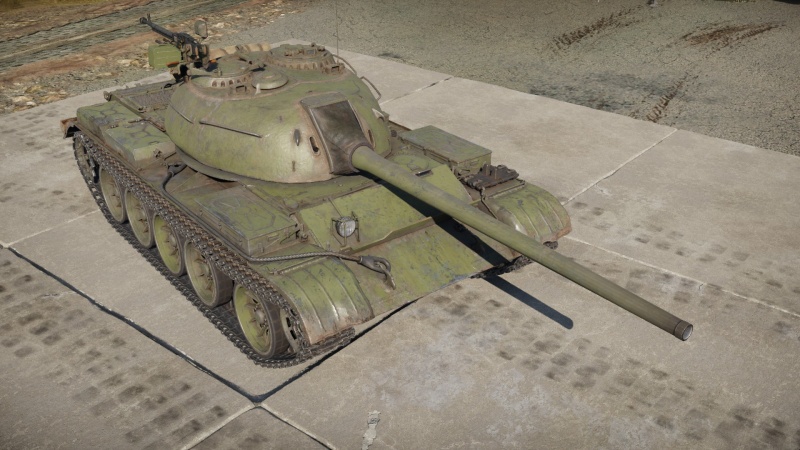 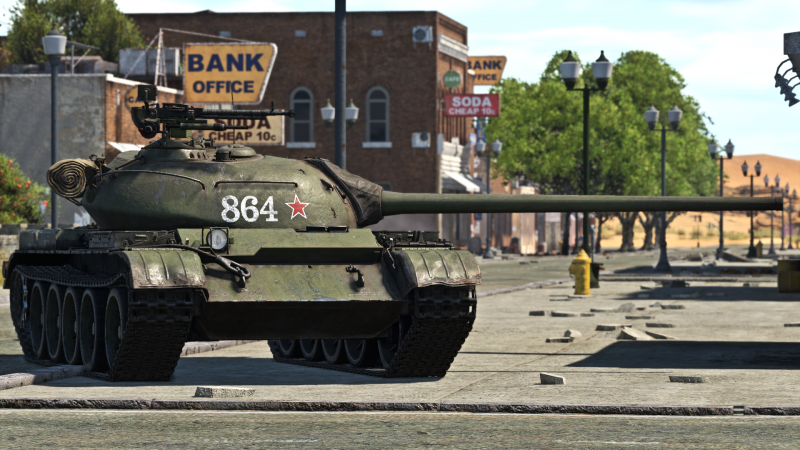 After Parts and FPE, the player should focus on mobility upgrades or the Horizontal Drive modification, since both mobility and turret rotation are limited when the tank is stock. 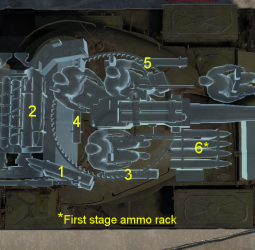 The T-54 (1949) is an upgraded version of the T-54 (1947), it has a turret without the shot-trap, and it has generally more armour, however this is counteracted with weaker hull armour, and this does make a difference for some early APFSDS and some HEAT rounds (the War Thunder community generally accepts the T-54 (1947) as having the best armour overall). Another upgrade is the new APDS round, which has superior penetration. This round should be used to take on only the most armoured targets frontally because it does minimal damage - BR-412D still is considered the better round because it has enough penetration and it knocks out vehicles with a single shot easily.

The T-54 (1949) continues in the steps of its predecessor, still being a Jack-of-All-Trades tank, on the same platform with the same gun. Importantly, it has improved turret armour, although at the cost of hull armour, which promotes hull-down gameplay. In Arcade, the T-54 (1949) retains the mobility of the T-54 (1947), but now you have the back-up option of using APDS. (Read the T-54 (1947) article, as it covers general playstyle with more depth)

When grinding the first modifications, Arcade Battles might be more fun, because of faster-paced gameplay and the ability to see all threats. Now, it's a priority to research Parts and FPE. (Activating universal back-ups for this vehicle to speed up the grind is an option, but it is not an exceptional vehicle, and it's best to just research the T-54 (1951), as it has more ammunition choices).

Despite the T-54's great performance in its design, the T-54 did not stop at its base model. The first upgrades done was in 1953 and 1955 when the tank's D-10 gun was given stabilization gear, first with a vertical stabilizer in 1953 before upgrading again with a 2-plane stabilizer in 1955. These tank upgrades renamed the T-54 to T-54A and T-54B for the respective years. While an improvement in the tank's performance, the biggest jump came with the advent of nuclear technology in the Soviet arsenal. When testings show that a T-54 can survive the blast of a 2 - 15 kt nuclear charge at 300 m (700 m for crew survival), the T-54 was slated for the instalment of a Nuclear, Biological, and Chemical (NBC) protection system to protect the crew from the weapons of mass destruction. This project was given to the KB-60 design bureau in Kharkov and this was finished in 1956. Along with many other changes to the tank interior, such as a new engine, heating system, fuel tanks, ammo storage, and new guns sights, the tank became the more common T-55 tank, which would replace the T-54 design in production past 1958. The difference in the T-54 and the T-55 other than the mechanical differences is the presence of a dome-shaped ventilator in front of the loaders hatch, it is a T-54 if present as it was removed in order to seal the tank with NBC protection. All in all, the T-54/55 tank series became the most widely produced tank ever, surpassing the T-34 with an estimated 100,000+ built, many due to the export market and licensed manufacturing the Soviets gave to their allies.

The T-54 simplicity and reliability made it a very easy tank to operate, not requiring a thoroughly trained crew to operate (though a better crew can give better performance). The T-54 also presents a very low profile compared to the American and British tank, which makes it a smaller target to hit. The lightweight of the design at only 36 tons made it very easy to transport around on flatbed. The tank also features extra abilities like a cold-weather starting system and a snorkel for deep-wading that were mostly absent on similar vehicles. Finally, the 100 mm D-10T gun was much better than anything fielded as tank armament, able to defeat the American Patton and the British Centurions, which were their mainstay tanks. Even after the introduction of superior tanks like the M60 tank with the 105 mm M68 gun, the T-54 is able to keep up with new HEAT and APDS rounds.

However, the T-54 design suffered from some of these advantages. The small profile gave the tank a small interior volume, which causes such a constraint to crew space that a height limit had to be set. The low turret silhouette also made the tank unable to depress the gun in a large angle due to the gun's breech hitting the roof, which restricts the T-54 ability to enter a hull-down position. Like other tanks in its generation, the T-54 also had unprotected ammo storage, which increased the chance of a catastrophic explosion of the ammunition if the tank is penetrated in battle.