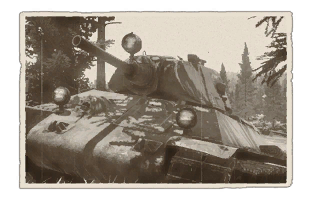 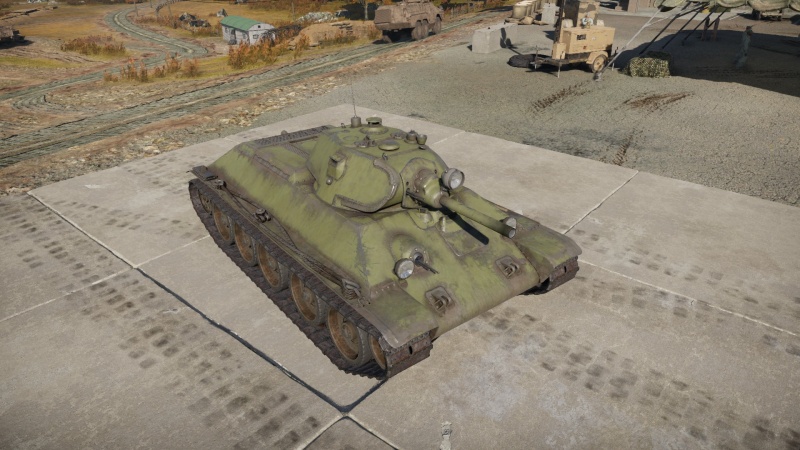 The T-34 (Prototype) is a premium gift rank II Soviet medium tank with a battle rating of 3.3 (AB/RB) and 2.7 (SB). It was available only for pre-order during the Closed Beta Test of Ground Forces before Update 1.41, then discontinued after the update's release. 500 units were also for sale during the 5th Anniversary event, which sold out within 12 hours.

The prototype of the T-34, known as the A-34, was the end result of almost five years of development that would eventually become the mass produced T-34. The T-34 prototype plays like any other T-34, with its high top speed, an adequate 76 mm L-11 gun, and heavily sloped 45 mm armour. These traits make the T-34 prototype a great vehicle for flanking vehicle and as a brawler. While there are vulnerable points on the front that could be penetrated by its contemporaries and lower, a quick and aggressive fighting style could reduce the amount of time the enemy has to aim for these spots to disable the T-34 prototype.

The T-34 prototype presents some similarities and differences from its successor, the T-34 (1940). The front hull are identical, including the rather flat step for the driver right above his hatch's periscope. This spot only has a slope of 22° that gives only 48 mm effective armour. There are also two headlights in the front hull on both sides. Another significant detail on the hull is on the left hull on top of the track fender, which has a large rolled up canvas that is absent on the T-34 1940. Turret shape between the two tanks are about identical, with the exception of an extra light on top of the gun and a protruding antenna from the turret top's antenna mount.

Otherwise, the T-34 prototype follows the trend of a heavily sloped hull on all sides with 45 mm on the front and 40 on all other sides. The T-34 prototype shares the same gun, same weight, and same armour as the T-34 mod. 1940 counterpart. However, the prototype has a higher engine power compared to the mass-produced T-34/76. This allows the prototype to gain speed and retain a higher max speed.

Several noticeable weak points on the T-34 prototype are the turret cheeks, which on the vertex areas are only 45.1 mm thick, allowing even 37 mm guns to penetrate from a reasonable range. Two weak points on the front hull are the step above the driver's hatch and the machine gun port, both of which have points of minimum sloping that degrades the full slope capability of the front hull. More precise shooters can also aim for the turret ring, which is only sloped enough to provide ~60 mm effective armour from all direction.

Given that the T-34 prototype nowadays is a rare tank, it is an unlikely opponent to be found on the current War Thunder battlefield. In the case it is found, defeat it in the same manner as any other T-34 tanks. The T-34 prototype has a higher power rating compared to other T-34/76 tanks so the T-34 prototype may move faster than the usual, which would affect the correct lead in aiming at a moving target. Though getting to the side may seem like an easy manoeuvre, the sloped side hull gives the T-34 a good chance to bounce shots. To counter this, aim for the flat hull sides near the suspension wheel areas (careful not to hit the track or wheels), or just hit the turret sides to knock out the loader or gunner, both of which would deteriorate the T-34 prototype's combat performance.

The T-34 prototype can encounter Germany's longer 75 mm KwK40 L43 gun on the Panzer IV F2, the Japanese 75 mm Type 3 gun on the Chi-Nu, and the American 75 mm on the M4 Shermans to be able to reliably penetrate its front weak points. Tanks with weaker guns could also aim for the weak points on the turret cheeks, driver step near the hatch, machine gun port, turret ring, and the lower side hull for a penetration.

The T-34 prototype, due to its weaker 76 mm L-11 gun, does better in closer encounters against thinner armour than long-range. This type of conflict encourages flanking manoeuvres and brawling tactics.

The T-34 prototype's higher speed makes the vehicle more favourable for getting around the enemy's sides. This, combined with the BR-250A APHEBC round, can have the T-34 prototype land an exploding round right into the side hull of an enemy tank, hopefully destroying them instantly. This tactic works favourably in larger maps such as Carpathians and Eastern Europe to get around the enemy from a distance and close in on a term in favour of the T-34's. Though, the T-34 would risk running into enemies with more capable long-range fighting skills like the high-velocity 75 mm KwK40 L43 gun that can end the T-34's run easily.

In CQB settings like Advance to the Rhine or Berlin, the T-34 can exploit its speed to get around the city landscape and get to critical points before the enemy could. Though some light tanks could beat the T-34 prototype to these locations, those vehicles could be easily dealt with if engaged first. Be proactive in annihilating the enemy and playing the objective, both of which could be done by controlling a zone of access from the flank position to destroy all enemies crossing the gun sights.

The T-34's large sloped armour on the turret and hull, barring the weak points, make quick reacting situations in close-quarters brawling favourable for the T-34. In a surprise engagement with an unsuspecting enemy, a careless shot from them will most likely bounce off the large surface area of the front hull or the top and bottom side of the turret cheeks. If the enemy fired before the T-34 did, it now has all the time to line a perfect shot for the 76 mm. However, the 76 mm gun in close range also a good ~70 mm penetration, quite capable to most enemies at its BR except against heavy tanks like the KV-1.

The downside with this tactic is the relatively longer reload time on the T-34 of ~8 seconds. When encountering enemies with rapid-firing guns, even the 50 mm guns on the Panzer III can penetrate the weak points and deal a mortal blow to the T-34. Thus, it is important to make sure the T-34 is always fully reloaded and that the first penetrating hit cripples the enemy tanks. It is also important to try and deal with individual enemies instead of multiples as the T-34 prototype is poor in dealing with multiple enemies trying to flank and hit weak points.

By 1939, the most numerous tank models in the Red Army were the T-26 and the BT-series light tanks. Though adequate on the days they were introduced, they are now outdated by this time due to the changing technology in anti-tank warfare. Back in 1937, a new tank project was already taking place under engineer Mikhail Koshkin, who was assigned to lead a design team at the Kharkiv Locomotive Factory (KhPZ) for a replacement for the BT light tanks as a new "cavalry tank" to engage in manoeuvre warfare. The first prototype was designated the A-20 with 20 mm of armour, a 45 mm gun, and a diesel engine in a V-12 configuration. The Christie suspension is taken from the BT, even the conversion to drive track-less on roads. But gradually, the new track designs available made this conversion redundant and was excluded in further models. The A-20 also showed the effective research done into sloping armour on previous prototype designs, utilizing an all-around sloping armour on the design.

It was during this design process that the Russo-Japanese border wars took place and showed the deficiency of the T-26 and BT models. Koshkin then appealed for the initiation of a much better tank concept, the "universal tank" to completely replace the T-26 and BT tanks. The second prototype was the A-32 and has an increased 32 mm of frontal armour with a 76.2 mm L-10 gun. The heavier prototype was still just as mobile as the A-20, and further development into the design increased the frontal armour thickness to 45 mm thick and a newer 76.2 mm L-11 gun attached instead. This prototype model presented, called the A-34, was approved for production and designated the T-34 after the year 1934, when Koshkin believed was when he formulated the idea for the T-34. Koshkin, however, never saw his tanks in action as he succumbed to pneumonia in September 1940 after trials with the T-34 in the cold winter. Thus, the drivetrain developer Alexander Morozov was appointed as the next Chief Designer. The T-34 tank would go on to become the most produced World War II tank, with 84,000 tanks produced in the production span between 1940 to 1958.

The prototype of the T-34 was designated the A-34 and was the pre-production model. One notable feature on this tank was a complex single-piece front hull, without the swinging hatch available for the driver to use.