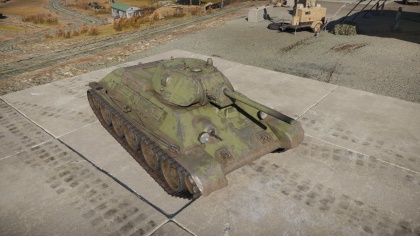 The T-34 has a crew of 4 men packed tightly together, and one shot would incapacitate a few crew members. The ammunition is conveniently stored below the tank, making it difficult to detonate. Carry a decreased ammunition load, preferably 15-30 shells, and the enemy would have a hard time detonating your ammo. However, shrapnel from HE shells shot below you can be dangerous, especially when you encounter a Ho-Ro, for example. The engine is the module most of your opponents will target. Parts and FPE should be researched to be able to survive the shots targeted at your engine. However, your quite low rate of fire (~9 sec reload stock) will give your enemies a second, final blow.