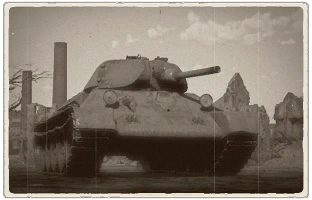 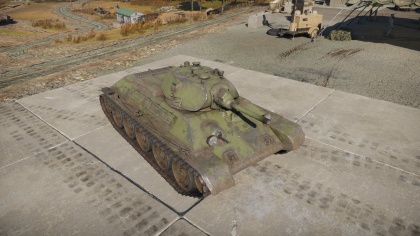 The T-34 (1940) is a Rank II Soviet medium tank with a battle rating of 3.3 (AB/RB) and 2.7 (SB). It was introduced during the Closed Beta Test for Ground Forces before Update 1.41. The first public iteration of the T-34 series, the T-34 1940 shows most of the early Soviet weaponry but provides a demonstration of its famous sloped armour and mobility.

The T-34 mod. 1940, like all the other T-34s, is fairly quick and manoeuvrable, decently armed, and decently armoured. It is the first researchable T-34 and the "oldest" (worst) model, aside from the T-34 prototype. It is notable for its distinct appearance, with its broad, sloped front, large road wheels, and comparatively narrow turret. It is distinguished from all other T-34/76 models in that it has the L-11 gun, as opposed to the more powerful F-34. It is identified by its low-slung barrel, with a recuperator creating a bulge above it. The vehicle's speed allows it to be a versatile flanker, but its armour keeps it competitive enough to be a brawler. It will also bounce somewhat frequently so angling the armour, as with any T-34, is helpful. The gun is decent for its rank but will struggle to penetrate other T-34s, KV tanks, M4 Shermans, and similar vehicles from the front.

The T-34 1940 can pose a formidable enemy at its BR (3.3) and one might find it a resilient and stubborn foe. If your vehicle can reliably penetrate 90mm (more if the vehicle is angled) of armour at medium to long-range, you should try to eliminate the T-34 at the longest possible range, where the L-11 gun will perform poorly. If your weapon cannot reliably penetrate 90mm of armour and you are forced to close the distance, be wary of your foes mobility. Brawling with a T-34 1940 is not recommended, the mobility and armour of the vehicle combined with a quick turret rotation speed may prove fatal. However, the T-34 is not an invincible foe. The T-34 1940 has a weak turret, which even some rank 1 guns can penetrate! It is recommended to aim for the turret ring, as the cramped crew compartment will result in an easy crew kill. Another weakspot of the T-34 is the turret cheeks - there are some flat spots that are 45mm, disabling the turret crew and the gun. A shot may ricochet off the turret cheeks into the crew compartment.

This is the first non-premium model of the T-34 series. It's a powerful breakthrough tank in the right hands due to its battle rating, good armour and powerful gun but is prone to get heavily damaged or destroyed from shots to the turret ring or cheeks. Keep moving, using its high speed and manoeuvrability, and get close to guaranteeing a penetration and angle the armour to easily bounce shells from enemy tanks.

The T-34 features great speed and agility, together with a good turret traverse and reload speed. It is best used in groups employing flanking manoeuvres and focusing on the impressive speed of the vehicle to catch players off-guard. The armour is also thick and sloped, allowing it to bounce the shots from the short 75mm's and the high-velocity 50mm's on German tanks although the Panzer. IV Ausf. F2's gun will easily go through the sides or UFP even with moderate angling.

At 3.3 the T-34 1940 faces a lot of German and Japanese armour. These Axis tanks tend to have very flat and thin armour which make the 76mm APHE shell extremely effective. The high HE filler makes one-shotting Panzers, Chi-Ha's, etc., very easy. At range, however, Axis long-guns excel - get up close and personal to your opponents.

By 1939, the most numerous tank models in the Red Army were the T-26 and the BT-series light tanks. Though adequate on the days they were introduced, they are now outdated by this time due to the changing technology in anti-tank warfare. Back in 1937, a new tank project was already taking place under engineer Mikhail Koshkin, who was assigned to lead a design team at the Kharkiv Locomotive Factory (KhPZ) for a replacement for the BT light tanks as a new "cavalry tank" to engage in manoeuvre warfare. The first prototype was designated the A-20 with 20 mm of armour, a 45 mm gun, and a diesel engine in a V-12 configuration. The Christie suspension is taken from the BT, even the conversion to drive track-less on roads. But gradually, the new track designs available made this conversion redundant and was excluded in further models. The A-20 also showed the effective research done into sloping armour on previous prototype designs, utilizing an all-round sloping armour on the design.

It was during this design process that the Russo-Japanese border wars took place and showed the deficiency of the T-26 and BT models. Koshkin then appealed for the initiation of a much better tank concept, the "universal tank" to completely replace the T-26 and BT tanks. The second prototype was the A-32 and has an increased 32 mm of frontal armour with a 76.2 mm L-10 gun. The heavier prototype was still just as mobile as the A-20, and further development into the design increased the frontal armour thickness to 45 mm thick and a newer 76.2 mm L-11 gun attached instead. This model was approved for production and designated the T-34 after the year 1934 when Koshkin believed was when he formulated the idea for the T-34. Koshkin, however, never saw his tanks in action as he succumbed to pneumonia in September 1940 after trials with the T-34 in the cold winter. Thus, the drivetrain developer Alexander Morozov was appointed as the next Chief Designer. The T-34 tank would go on to become the most produced World War II tank, with 84,070 tanks produced in the production span between 1940 to 1958.

The T-34 Mod. 1940 was the initial production variant of the T-34 and the first of the T-34/76 series. In its initial stages, it ran into political trouble from the conservative side, who wanted to keep the T-26 and BTs in production, that or keep the T-34 out of production as the more advanced T-34M completes its development to take over the tank role more effectively. However, these concerns were dissipated with the Winter War against Finland and the German Blitzkrieg tactics across Poland and France, which then advocated for the mass-production of the T-34 to compete against the Germans and improve the Soviet armoured forces.