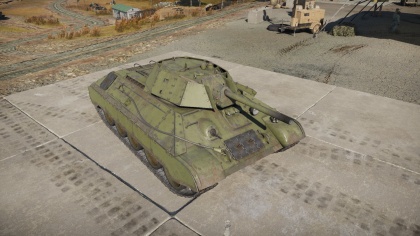 T-34E has a decent top speed of 42 kph, T-34E is slightly slower than its other twins T-34 (1940) and (1941) because of its extra weight of the spaced armour. With this speed, you will be able to reach a certain position before other medium tank counterparts. To use this speed to the fullest, players are suggested to flank around the map and get side shots of enemies. The Reverse speed of T-34E is mediocre, which means that players should attempt to not overextend when attacking, or this often results in destruction.