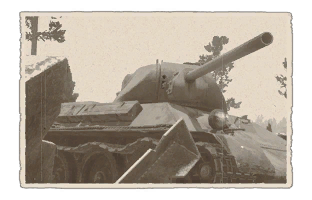 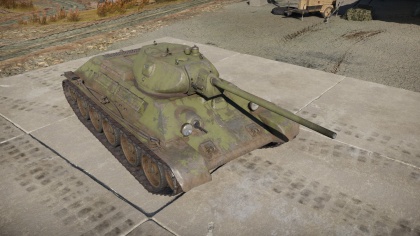 The T-34-57 is a rank III Soviet medium tank with a battle rating of 4.3 (AB) and 4.7 (RB/SB). It was introduced during the Closed Beta Test for Ground Forces before Update 1.41. The 57mm ZiS-4 gun can prove to be formidable at its battle rating, providing a noticeable improvement in penetration power, better aerodynamics and faster fire rate than the 76mm caliber T-34's of the similar Battle Rating, with a slight sacrifice in post-penetration damage and a higher chance of ricochet on angled surfaces compared to guns of higher calibre. The tank's armaments make fighting at long and short range a boon.

Operational and visual characteristics of the T-34-57 are as similar and as common to previous 76mm-armed T-34 lineage of tanks as they come, with the exception of a gun of smaller caliber and higher penetration power. Players experienced in operating previous models of the T-34 in Rank II should have little to no difficulty in adjusting to this vehicle. Due to the similarities, however, the tank inevitably inherits both its predecessors' strengths and weaknesses. It is to be noted that armour is ineffective against the occasional Rank III guns; usage of speed and agility to move quickly, to avoid enemy fire and moving cover-to-cover will prove advantageous.

In lower tier battles, the T-34 will be in its element, picking off common foes like Pz. IVs and Shermans with ease at long range. The 57mm gun performs very well at long range against these tanks, so don't be afraid to hold back. However, you are just as effective pushing towards capture points. At lower tiers your armour is still quite effective, so angling can make you very difficult to penetrate. Just be aware that your turret armour is quite weak.

In higher tiers (up to 5.3), you will be less effective. There are many tanks that you will not be able to penetrate from the front. The Sherman Jumbo and Churchill Mk VII are notable opponents. Their armour is very thick at the front bar some small weak spots (machine gun ports). Luckily you will be working with tanks like the T-34-85, SU-85 and even the IS-1, which can destroy the Jumbo under 500m. Leave the front line combat to them. You can flank and hit your enemies from the side. It is the only way for you to be fully effective. At the top tier, the 57mm will have gone from being a highly effective precision weapon to a relatively hit and miss weapon. Some targets you can penetrate, others you will need to retreat from.

Pretty much any tank can be penetrated by the 57mm gun at this tier, but there are a few enemies worth noting.

M4A3E2 Jumbo - This tank is the bane of everybody's life at this BR. It's turret in almost impossible to penetrate without APCR (which the T-34-57 does not have), its hull is VERY bouncy, and its gun can easily penetrate your armour. Avoid approaching from the front and flank if possible. If you find yourself backed into a corner, you can try and aim for the machine gun port in the hull. The explosive power of the 57mm isn't great, but penetrating this point means that you can at least cripple the jumbo and make your escape.

Panzer IV variants with KwK 40 L/43/48 75mm gun - These tanks are common at this tier and they can easily take you out with their powerful 75mm guns. However, they are easy to take out if you get the jump on them. Your high penetration 57mm gun can slice through their armour at long range.

8,8 cm Flak 37 Sfl.- The flak truck can destroy you at seriously long range, whilst its thin armour makes it very hard to effectively damage. Your rounds may simply pass straight through and not cause any damage. The best way to take one out is by aiming for the large ammo box at the back of the vehicle, which will explode when hit.

Other T-34 tanks (except 1940 variant) - Many of the T-34 variants (1941, 1942, T-34E STZ, etc.), including the T-34-57, can comfortably penetrate each others' armour at reasonable distances. Unless you are playing SB, you are likely to come up against other T-34 variants. Since you play this tank, it's easier to know your strengths and weaknesses. Make sure the hostile T-34 is not looking your way, then fire into the main hull or the turret to knock out the crew or blow up an ammo rack. Retreat to a safe distance before re-engaging. If direct confrontation is inevitable, angle your hull and fire into the front of the hostile tank to at least disable them and give you time to re-position, finish destroying the enemy, or escape.

Work on the tank began in the summer of 1940 with a view to upgrading its armament. At that time, the new 57 mm ZiS-2 anti-tank gun was put into operation. In April 1941, the weapon was installed on the tank and tested on a ballistic range. The tests were unsuccessful and the cannon required significant modifications, which were performed on a tight schedule. In July of the same year, the improved weapon was installed on the tank again. This time, the results were much better - the improved ZiS-4 version, designed specifically for tanks, could now destroy targets at a sighting distance of up to 2,000 metres. At maximum distance, the weapon penetrated 73-82 mm thick armour, and at minimum distance, 83-98 mm thick armour. After these successful tests, the anti-tank gun was put into service under the designation ZiS-4.