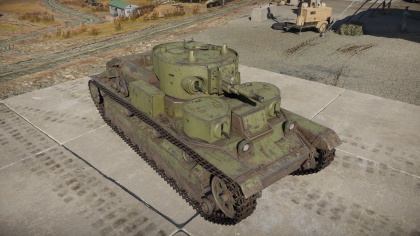 The T-28E is a Rank II Soviet medium tank with a battle rating of 2.3 (AB/RB/SB). It was introduced with Update 1.47 "Big Guns". It is similar to the original T-28 in all respect except the additional armour welded onto the front, side, and rear of the tank. The additional armour improves protection against enemy fire but slows down the vehicle due to increased weight.

The powerful, yet accurate gun, paired with large profile make the T-28 look ideal for long-range encounters, yet its low penetration, slow shell travel speed and no real gun depression to cover yourself behind terrain quite discourage this kind of gameplay style. But the crew/equipment spacing, its high versatility and powerful main gun make this tank quite capable in close range encounters. Hit and run tactics work pretty well (if the "run" aspect of it is ever needed).

It is good to know the characteristics of your ammo types, as all 3 can be used effectively, according to the current situation and composition of enemy tanks. (See more info in the "Ammunition" section.)

The extra armour on this tank is noticeable, especially when you angle your tank a bit, random poorly aimed shots will often be "consumed" by extra layers of armour, or machinegun turrets, or will simply ricochet off. However, this is only true when you are playing as a "top vehicle" against weaker opponents. This tank has a slightly higher BR, and when MM puts you "on the bottom", your armour will unfortunately again protect you like a paper against bullet does. Heavy tank like KV-1 (L-11) is completely immune to all types of your ammo, even from the rear. Avoid it.

A version of the T-28 multi-turret medium tank with additional armor plating on the turret and body. Its enhanced armor was based on the experience of the Soviet-Finnish War and also had the goal of adapting outmoded tanks to meet modern conditions.