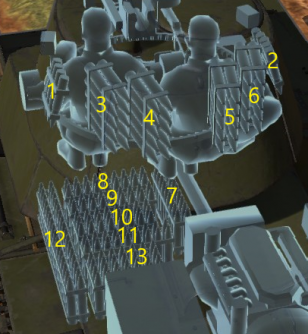 The T-26 is an excellent support and flanker type of tank. Other light tanks at this battle rating typically are faster but lack the bouncy and generally OK armour. With this vehicle holding a point or pushing with your team is crucial as this vehicle is very good at that at its BR. With its gun it can pack quite the punch while still remaining a good distance as its APHE shot will be your best friend. Try to not compete in closer combat as you will see how other tanks use their speed advantage to flank you and catch you off guard, instead try to stay at a relatively medium range where you have a chance to bounce a shot or two and the enemies maneuverability isnt that much of a worry. German tanks are your easiest kills but also one of your worst enemy while the american LVT can just eat your shot and is best to try to avoid them. In general best way to play this vehicle is to follow your teamates and support them or cover the flanks from any enemies.