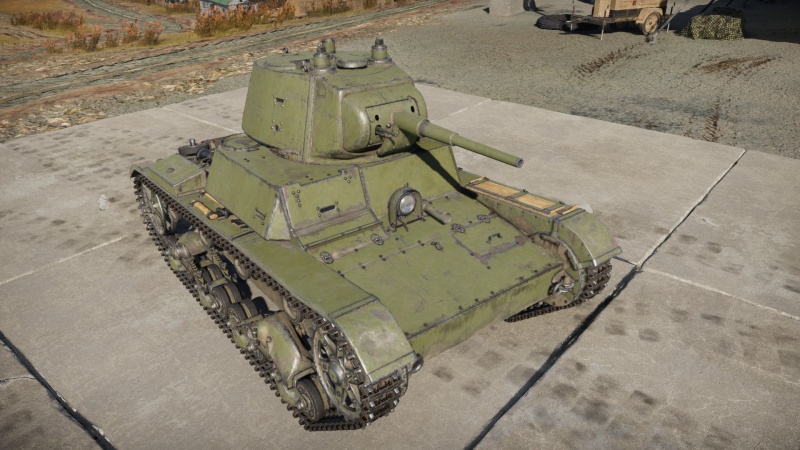 This is one of the Soviet starter tanks. Unlike its German counterpart, the PzKpfw II Ausf.C, it has a single-shot cannon that makes it more suitable for ranged engagements. With its poor armour, it is recommended to stay at distance from autocannons and heavy machine guns (HMGs) since they can shred the T-26 pretty easily at any angle. With light armour, average mobility, and a good gun for its rank, the T-26 is frontline support. While these qualities may not be representative of later Soviet tanks, it is a good trainer nevertheless, given that it is forgiving and harder to play than later tanks.

This is definitively the worst characteristic of this vehicle; armour is flat and thin on all sides. Do not expose yourself to enemy fire. Crew placement is not lined up from the front, meaning up to 3 shots of shells without HE filler can be taken before being destroyed. Beware of HMGs and autocannons, since they will be able to penetrate your armour. 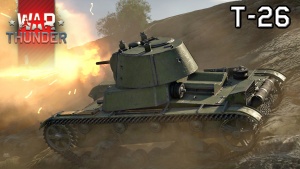 The T-26 is definitely best suited to a more support role, flanking the battlefield and finding a good position to support your teammates from, the 45 mm cannon has very good characteristics with its rounds (APHEBC, AP) being able to deal fair damage to enemy vehicles from short and long-range and the fast reload allowing for quick adjustment of aim between shots, this allows the T-26 to be a highly effective flanking vehicle if a good camping spot is found, however, the limited gun depression (-6°) will affect which positions are usable, keeping long-range is certainly an effective way to avoid taking damage. The T-26 is also usable at closer ranges for brawling with enemy vehicles, but it should be kept in mind that the thin armour on the T-26 (≤15 mm) will leave the vital modules of your vehicle such as your crew, gun & powerplant (engine & transmission) at risk of taking damage, the mobility of the T-26 is also lesser than many of its counterparts which could potentially put it at risk in a brawling scenario, on the other hand, the T-26's good reload (3.77 - 2.9s) will usually give it an upper hand if you can survive the first shots against an enemy vehicle.

The lack of armour is really something to be kept in mind, even some machine guns (8 mm, 12.7 mm) will be able to go through you thickest pieces of armour (15 mm), due to this you want to be trying your best to avoid enemy vehicles getting the first shot, driving undercover is advisable to avoid being spotted and if you spot an enemy vehicle it would be best to engage and destroy them as soon as possible to avoid them becoming a threat, due to the lack of effective armour, aircraft can also be a risk, again, staying in cover will make it more difficult for enemy vehicles to spot and engage your T-26.

In terms of the T-26's gun, there are 2 round options, the APHEBC round has 70 mm best effective penetration as well as 29.26 g of TNT equivalent explosive, this will allow for this round to penetrate most armour at this BR and also have good post pen damage if the fuse is set off. Second round type is an AP round, this has 73mm best effective penetration but lacks any explosive filler, this makes its post pen damage less effective than the APHEBC round. More info on both these rounds can be found in the "ammunition" section above.

It is also worth keeping in mind that the reverse speed is only 3 km/h, so you will have to be careful when driving out into the potential enemy fire. 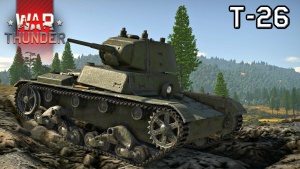 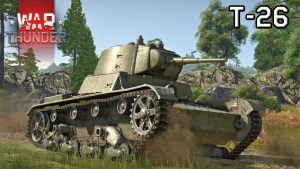 In 1940, the T-26 light tank was modernised for the last time. The vehicle's underturret box was equipped with homogenous armour with sloping plates and its thickness was increased to 15 mm. The frontal section of the turret was welded. A distinctive feature of the tank was the special defensive cover over its radiator grille. An extra DT machine gun was mounted on the turret's roof and was used as an anti-aircraft gun.

A significant number of these tanks, after being captured and modified in various ways, served in the German and Finnish armies. Some of them were used by Finland until the beginning of the 50s.