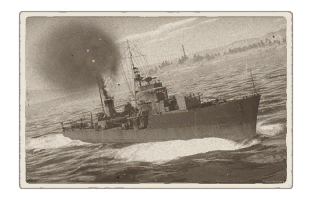 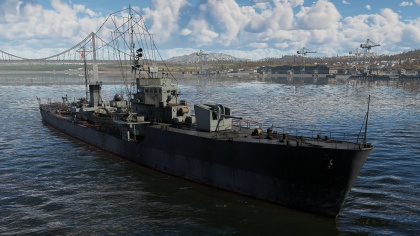 The survivability of the Syonan is heavily dependent on what's engaging it, its hull is armoured similarly to a Destroyer, with 23mm of steel, this makes it largely immune from smaller caliber fire, and certain smaller HE rounds, the only additional armour protection it has is present around the two main guns, 15mm of antifragmentation armour, which again protects them against smaller caliber guns somewhat reliably. It has two main weaknesses though, firstly its size, because it's so large and slow it will take a huge amount of fire. Not every incoming round will score damage but over time it does all add up. Its size also makes it very vulnerable against torpedoes. It's also very vulnerable to being ammo racked, there are two very large exposed ammo racks underneath each gun, and they can be detonated by a few well placed AP shots, even smaller caliber guns can destroy the ammo rack, so it's important to never present a flat angle of the ammo storage.

The Syonan is a relatively slow ship, reaching a max of 36 kp/h in RB modes and 55 kp/h in AB modes. The real issue though is with it's mobility, it's very unresponsive to input and will take a fair while to come to a stop, engage a reverse or turn. Safe to say its mobility holds the ship back a bit, as it spawns with the smaller vessels, its very vulnerable to torpedoes- especially without any mobility upgrades. It also lacks the overall agility to escape from Destroyers if caught out in the open.

The Syonan is equipped with two 120mm Type 3 cannons for its primary weapon. They do a good amount of damage to smaller boats but the gun handling lets them down, they reload very slowly, at around 5-6 rounds a minute on an average crew, and traverse very slowly, at around 5 degrees a second, because of this they're a fairly poor weapon at closer ranges when needing to track small fast boats, and if the round misses- you'll have to wait upwards of 10 seconds to fire off another shot. These guns do have viability against some of the larger patrol vessels you'll come across, and will be your go-to weapon at longer ranges.

The Syonan is equipped with 5 triple mountings and one single mounting of the Type 96 25mm cannon. Against small unarmoured boats these guns collectively make an for an overwhelmingly powerful weapon, the volume of fire will destroy a small boat within a few seconds if the shots connect. The guns have 15 rounds in the magazine, but reload very quickly, and because of this have no overheating time, so they can be fired continuously effectively. The guns come with three belts-

Overall, the HEIT rounds perform the best, they have a huge damage output and will sink enemy vessels in seconds if a few of the mountings hit, but it's also recommended to take a few AP belts, in case you run into an armoured river boat.

The Syonan can carry 14 Type 95 depth charges, which can be dropped to maim other naval targets, they have rather limited viability though as most MTBs will be able to outrun the explosion. As this ship is so large and slow, the only viability these charges have is against enemy MBTs sneaking up behind you, this is a fair rare occurrence however. 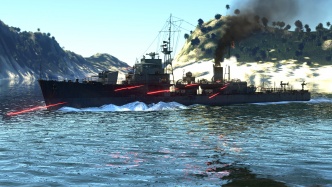 First and foremost the Syonan is a very powerful ship, and has the potential to cause incredible damage to the enemy team if in favorable circumstances. It can be devastating against smaller ships, or vessels with little meaningful armour protection, but it's very weak against Destroyers, and enemy players that know how vulnerable the ammo racks are. Because of this, to be successful the Syonan needs to played carefully. Advancing too far into the map can be dangerous, as this allows for enemy MTBs to launch torpedoes at you at close range, and as the Syonan is very slow avoiding torpedoes can be very difficult. Because of this, it's recommended to not sail too close to choke points or cover around the hostile parts of the map, as this allows for enemies to easily sneak up on you. In any case, watch MTB closely, if you see them launch you can correct your course ahead of time to assure the torpedoes miss. It's a good idea to do this anyway just in case torpedoes have been launched without you knowing, try not to sail straight for too long, as you lack the reactive mobility to alter your course quickly.

The most consistent weapon you have access to are the many 25mm cannons spread all over the vessel, consider using these as your main weapon as they present a much more accurate and damaging weapon collectively than you two main cannons, they can work effectively up to around 2,000 meters, any further than this and they will start losing potency. Also, try not to present a flat side angle to your enemies, as this makes your ammo rack a very easy target, try to angle the sides of the ship towards what you're engaging, this will stop some of the smaller caliber AP rounds from penetrating.