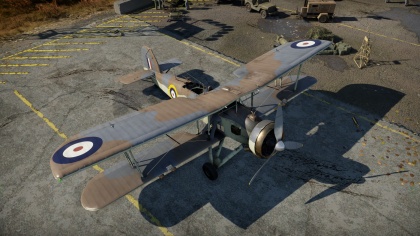 The Swordfish Mk I is a Rank I British bomber with a battle rating of 1.0 (AB/RB/SB). It has been in the game since the start of the Open Beta Test prior to Update 1.29.

A classic biplane design, thus offensive armament is limited. Restraint only to one machine gun offensively and defensively the Swordfish true strength is the payload.

The Swordfish Mk I can be outfitted with the following ordinance:

For now, the use of the Swordfish is confined to the early ranks, where it is moderately effective as a bomber. While it is slow and poorly armed, it is quite manoeuvrable and carries a decent payload. Therefore, it is strictly relegated to bombing and torpedo bombing. In ground RB, the Swordfish can be great for accurately bombing enemy vehicles, however, you will be a very easy target for SPAA and enemy fighters. Even tanks may try to shoot you down. Therefore you must be careful and try to drop your bombs as quickly as possible before returning to base to rearm. Hanging around once your bombs are gone will quickly get you shot down. Pinpoint your target at a distance, drop your bombs and then make your escape.

A good tactic is to fly at a distance from the fighting, keeping out of range of machine gun fire or worse. If an enemy starts to capture one of your capture points, you can then swoop in and bomb the capture point, clearing it of any enemy vehicles. This way you can be assured a target is available. Circling over the combat area looking for targets is not a good idea. This is risky enough in faster, more nimble aircraft, so in a big slow biplane bomber, it is almost suicidal.