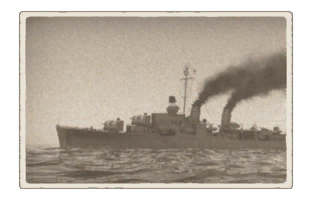 The ship is, along with the similarly named Somers (DD-381), the ultimate destroyer type ship in the American naval tree.

The USS Allen M. Sumner has very little but still significant armour. Encased in 19 mm of anti-fragmentation hull armour and 13 mm of anti-fragmentation deck armour, the Sumner's armour won't stop any shells fired by destroyers, let alone larger ships. The light armour will serve the Sumner as protection from smaller calibre machine guns rounds as well as some splash damage from HE shells. A major flaw in its armour, however, is found in the very weak armour of its primary 12.7 cm mounts. Anything larger than a .50 calibre machine gun can and will knock out the Sumner's turrets, this means that when facing against multiple targets, the Sumner can very quickly be put out of action.

The primary armament of the USS Allen M. Sumner comes in the form of 6 x five inch (12.7 cm) 5/38 Mk.12 Dual Purpose cannons, mounted in three dual turrets: turrets 1 and 2 fore and turret 3 aft of the ship. Although these are the same excellent guns as on previous Farragut and Fletcher-classes, the new dual turrets allow for very quick reloading as well as making concentrating your fire a bit easier. The guns' HE shells perform excellently against other destroyers, however they will struggle against most cruisers, most notably in engagements over longer distances, even with AP. These guns when paired with a good crew and the HE-VT shells can make for very decent longer range AA support.

The Sumner's anti-aircraft armament consists of ten single mounted Oerlikon Mk.II 20 mm cannons. This number once again tops the USS Cowell with its seven 20 mm cannons. Much like the rest of the Sumner's armament, the 20 mm cannons are very versatile, multi-purpose weapons. They play a very similar role to the Bofors 40mm cannons, however their smaller calibre means that in most situations it should remain as anti-aircraft armament, and leave the anti-smaller ship duties to the Bofors cannons. These are very standard and very good 20 mm cannons found on most American destroyers.

The USS Allen M. Sumner is one of, if not the most powerful and versatile destroyer in the game. The Sumner with its powerful main armament, ample anti-air capabilities and even some armour, can win almost any one on one engagement against enemy destroyers, as well as being capable of taking on support roles for its team. The Sumner is an extremely useful ship, functioning like a superior version of the Cowell (DD-547), having very similar roles on the battlefield, although each with their slight differences, giving them advantages in disadvantages in various areas.

The Sumner is equipped with one more main gun than the Fletcher (DD-445) and Cowell (DD-547). While this might not seem a lot, there is a key difference: the guns are mounted in three turrets, each containing two guns. This means that your shells will have better grouping, but the most significant advantage is when you're bow on towards an enemy. While the Cowell and Fletcher can only utilize two of its guns while facing forward, the Sumner has a whopping four, allowing you to deal twice as much damage when you are bow on. The Sumner's guns also fire faster than the Fletcher-classes, with a reload of 2.8 seconds aced compared to the Fletcher-classes' 3.7 seconds, giving them just another advantage. This allows you to put out a lot more shells in a short period of time compared to the Fletcher-class destroyers. Other than that, ship-to-ship combat plays out rather similarly to when playing the Fletcher-class ships. You will be able to take on most destroyers in a straight-up battle with your main threats being a Somers (DD-381), with eight guns, the Type 1936A (Mob) which has larger calibre guns, and the Tashkent (leader) which possess strong firepower. You have increased armour protection compared to the Fletcher-class destroyers which will help you to take a few more hits. However, as a trade-off, losing a turret that houses two guns is a much more significant loss. This is even more dangerous than the fact that your turrets are huge and are easy to take out. Nonetheless, the Sumner is a potent ship when it comes to gun fighting.

The Bofors cannons on the Sumner make for an extremely effective system to deal with smaller enemy vessels. The cannons will allow you to shred anything smaller than a destroyer, as well as some of the older destroyers like the Clemson and Mutsuki if they ever have the misfortune of coming across you. Get your crew to a point where they are good with the secondary armaments of the ship. When engaging small, fast boats, designate the target for your gunners and if you have no other immediate threats open fire on them with your main guns. A direct hit will be a one-shot kill, but even the splash damage can deal important damage to modules. Note that unlike the Cowell, you cannot fire off both of your dual Bofors mounts directly towards the bow as the ship's superstructure blocks the way. To deal with this, turn slightly to one side so that one side so that that side's mount can fire at them, sadly you won't be able to train both mounts on a single target. Turning a bit more will allow your quad Bofors near the stern of the ship to open fire. Always keep your head on a swivel when in patrol boat territory and never let them sneak up on you. The Sumner does not take torpedoes well and if a PT boat gets a torpedo off on you then there is not much you can do to avoid destruction. If you see a patrol boat nearby, turn in whichever direction you can, and keep your eyes on the water until you see the torpedoes.

Some of the greatest threats to the Sumner include:

The Allen M. Sumner-class was introduced as an improvement to the previous Fletcher-class destroyers incorporating many of the lessons learned during the war. Twin 5" guns simplified the deck layout to allow for the installation of a more powerful anti-aircraft battery. Two quad 40 mm Bofors mounts and two dual 40 mm Bofors mounts supplied the heavy anti-aircraft fire with 11 x 20 mm guns further improving the weight of fire coming from the ship.