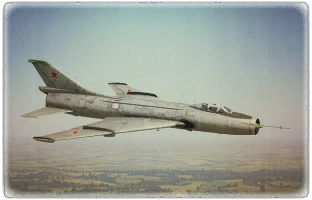 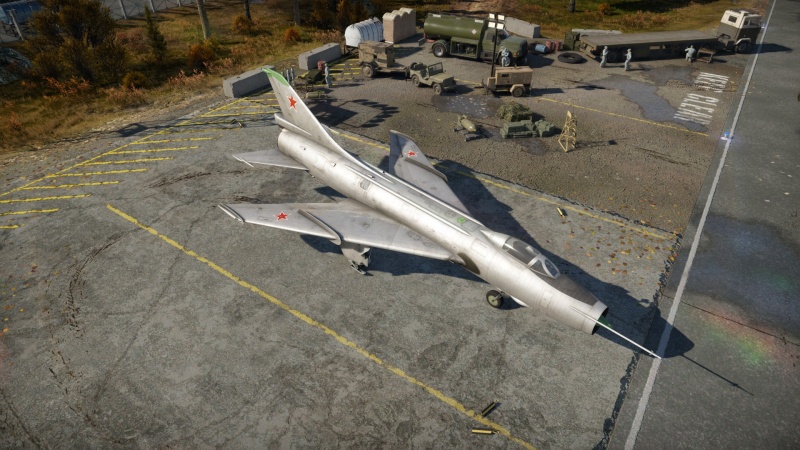 The Su-7BKL's manoeuvrability performance is not as impressive. Its sustained turn rate at low speeds is competitive, but instantaneous turn rate and maximum angle-of-attack are both relatively low compared to its adversaries. This may make it more difficult to get guns on target. Additionally, some yaw instability occurs at medium speeds when pulling high-G turns. Finally, note that the Su-7BKL can break its wings in turns exceeding 9 G's, though this G-number isn't obtainable unless the aircraft is clean and carrying less than 20 minutes of fuel.

If you aim to play the Su-7BKL in ground battles, the first priority is to unlock the aircraft's anti-ground ordnance. The FAB-500 bombs and S-24 rockets are particularly helpful. Otherwise, focus on flight performance upgrades, starting with compressor, airframe, wings repair and engine. After those upgrades are researched and purchased, the other flight performance upgrades can be researched. The 30 mm ammunition belts can be researched last as the stock ammunition belts are quite potent.

The Su-7BKL is armed with:

The Su-7BKL comes equipped with 2 x 30 mm NR-30 cannons; these will be familiar to pilots which flew the preceding Su-7B, or the MiG-19PT and MiG-21F-13 in the parallel line. The Su-7 has greater ammunition capacity than earlier MiGs with the gun, 160 rounds giving a trigger time of approximately 4.8 seconds. With velocity ranging from 780-785 m/s depending on the shell, this is much faster than the earlier NR-23 or N-37D found on earlier Soviet jets. This greatly simplifies aiming, and with the 67.14 g of TNTe filler found in the HEF-I and HEFI-T shells, hits from this cannon will usually cripple or destroy enemy aircraft on the first hit. As the Su-7BKL is a strike fighter the guns may also be used against armoured targets; the mix of AP-T with 48 mm penetration and APHE with 37 mm penetration, but 22.48 g TNTe of explosive filler will do significant damage to enemy armour. It is recommended to attack from above, as most enemy tanks have weak roof armour and can be more effectively penetrated from above.

The Su-7BKL can be outfitted with the following ordnance:

As a strike aircraft, the SU-7BKL has access to an array of ground-focused armaments, notably lacking air-to-air missiles.

The Su-7BKL gains access to S-5K, S-3K, and S-24 rockets in various quantities. The S-5K is the first rocket pilots will unlock; these are in a rocket pod, and pilots will gain access to pods of 16 or 32 rockets, with loadouts including either 96 or 160 rockets. These rockets are very small with a mass of only 3 kg, and only 150 mm penetration from the charge. Pilots are recommended to use the large quantities of rockets to fire salvos of rockets instead of attempting to destroy targets with a single pair, as these very small rockets are unlikely to reliably do so. The next rocket is the S-3K, these are larger rockets not found in pods, instead being mounted on rails attached to the pylons. These are much more substantial rockets, with a mass of 23 kg and 300 mm penetration. Volley fire may still be preferred as 42 rockets can be mounted, but single hits are more likely to destroy enemy armour than the smaller S-5K. The S-24 is the final rocket the Su-7BKL gains access to, a large rocket weighing 235 kg and with more explosive mass than a 50 kg bomb. This is very effective against enemy armour and is rather accurate as well, allowing pilots to use the rocket CCIP to hit targets from 2-3 km away; enabling pilots to keep their distance from enemy air defense. These rockets can also be used with a distance fuse, allowing it to detonate at a specific distance. This can either be used above the ground to hit soft targets behind cover, or in the air against aircraft, giving the Su-7BKL additional firepower against enemy aircraft. 6 of these rockets are mounted directly on the weapons pylons.

As for bombs, the Su-7BKL gains access to 3 types: 250 kg, 500 kg, and 360 kg incendiary bombs. The incendiary bombs are the first to be unlocked; these work well against open-topped vehicles but do no damage to enclosed compartments. They can be used against concentrations of enemy light targets, as cover or to block areas, as the fire will burn for some time after the bombs have landed. They also work well against bombing targets in Air RB, doing damage over time to the base. The 250 kg bombs are the first conventional bombs unlocked, followed by the 500 kg bombs. The 500 kg bombs can only be carried on the inner 4 pylons, leaving the Su-7BKL with a maximum payload of 4 x 500 and 2 x 250 kg bombs. This will work well in either air or ground forces battles when coupled with the bomb CCIP, especially since the bombs drop individually, allowing for 6 precise drops.

The Su-7BKL just like its predecessor (Su-7B) has a very good acceleration and can outspeed most jets, it can easily doge incoming missiles by turning as it can turn and still maintain most of its speed (mind the G forces as it can easily break your plane apart and make the pilot lose conscience). The Su-7BKL sports 30 mm NR-30 cannons and can also be equipped with both bombs and rockets for various types of playstyle. The Su-7BKL also comes with a rangefinding radar and the S-24 can be put on a distance fuse to be used in air combat.

At the start of a match, take 27 minutes of fuel and equip Air targets belt. Start ascending on a 30-35° angle to an altitude of 7-9 km, your goal is to get behind the enemies in order to easily take care of them without their knowledge of your presence. Keep flying at this altitude and overfly enemy fighters. If there is an enemy at this altitude, feel free to engage into a head-on or dodge them. Keep flying above the enemies until there are none underneath you, turn around and start descending while keeping an eye on your speed. Go for the nearest enemy or slowest (A-10s for example). Get behind them and approach as fast as possible as speed is your greatest advantage. Start firing when you're close enough. If the enemy is eliminated, go for the next one, but if you missed do not engage into a dogfight: maintain your speed and go after the next target. If there are any AI planes, you can safely go after them and make use of your gyro linked gunsight to auto adjust your guns' distance. Align your plane behind the AI plane, put your gunsight's dot on the plane, and shoot a short burst of rounds (it is more precise in the first person view). After having expended your ammunition, you can return back to the base to continue fighting or swap tactics.

At the start of a match, equip the 42 x S-3K rockets or the 160 x S-5K rockets (which will be helpful to take care of light and medium tanks). Start ascending on a 10° angle until above 1 km altitude, you will need the speed to quickly evade enemies and enemy missiles. It's best to flank and fly to the far sides of the map, so you can easily fly in a straight line and take care of ground targets one after the other. When firing at a ground target: any tank except for medium and heavy tanks requires a single hit by both rockets, while medium and heavy tanks would require 2 or more rockets. Always keep a eye on your surroundings as you're flying fast at a low altitude, which can catch the attention of enemy jets who will then try to engage you. Maintaining a high speed is important, in case a missile is fired at you. After depleting all of your rockets, you can head back to base to resupply rockets or start going after enemy players or AI planes.

At the start of a match, equip the 4 x ZB-360 bombs (as that is enough to take care of a base). And start ascending on a 20° angle to 4-6 km, you might be behind everyone a little bit but the higher top speed and acceleration you will get on this altitude will make up for it (and thanks to the ballistic computer bombing from this high altitude is no issue). Start heading for any enemy base and keep this altitude. Avoid any head-on and beware of enemies below and above you with missiles that might eliminate you. When you're near the base, start diving, enable your airbrakes, and get into position to drop your payload. Once bombs have been dropped, you can head back to base for another bombing run or start going after enemy players, AI planes or ground targets. The choice is yours.

When flying the Su-7BKL, equip the 6 x S-24 rockets (as a single hit from these is enough to take care of any ground target). Start heading to the battle area and keep a high altitude to avoid SPAAs and enemy planes. Once close enough, start diving and search for targets to fire at. If there is a SPAA that starts shooting at you, prioritize it above everything else. If there are no SPAAs, fire a single rocket at a target and go after the next one (even if it misses the target, the rocket will overpressurize them). Once too low, start pulling up and gain altitude again, then repeat this process until you're out of rockets. You can then go to base to resupply or go after enemy planes, soft ground targets or helicopters.

The Su-7BKL is equipped with a SRD-5 rangefinding radar, located in the nose of the aircraft. It will automatically detect and lock onto planes within the range. It is linked with a gyro gunsight and can help with aiming at close range.

Main article: History of the Su-7B

The Su-7BKL is a further improvement of the Su-7B fighter bomber. The main goal was to shorten the take off and landing distances on both paved and dirt airfields, so the aircraft was fitted with rocket boosters to reduce take off length by 800 metres, and improved landing chutes with enlarged areas to decrease landing distance by 500 metres. Rear landing gear length was reduced and skis were installed to the wheels, in order to make unpaved airfield landings more effective.