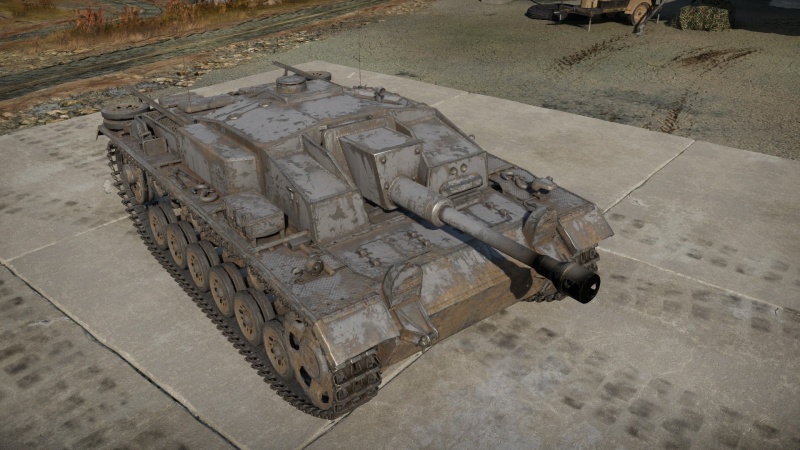 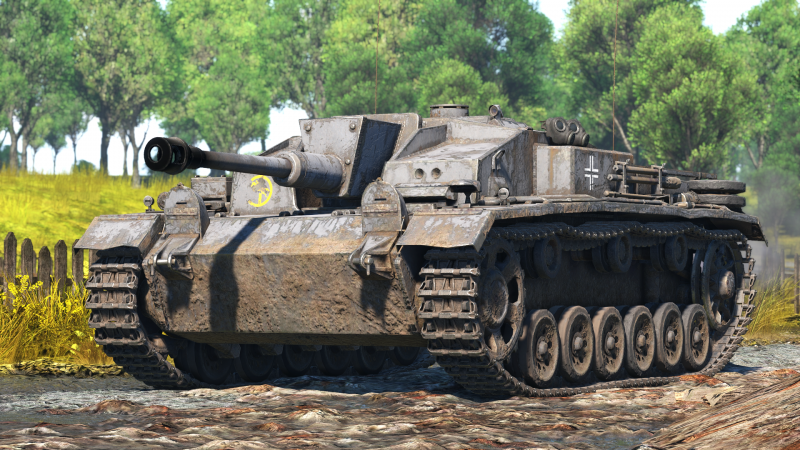 The Sturmgeschütz III Ausf. F (German armoury designation: Sd.Kfz. 142/1) is a rank II German tank destroyer with a battle rating of 3.3 (AB/RB/SB). It was introduced during the Closed Beta Test for Ground Forces before Update 1.41.

An improvement over the StuG III A with the installation of the longer 75 mm StuK 40 L/43 gun allowing it to be used as very deadly tank destroyer instead of support gun.

With a maximum of only 50 mm of armour on the superstructure, the StuG III Ausf. F is vulnerable to most guns that it faces, and even to lower rank vehicles if they get close enough. It must instead rely on its low profile in order to stay hidden and avoid incoming fire.

It should also be noted that the thin roof armour can be vulnerable to aircraft cannon fire, or even heavy machine guns at very close ranges.

The mobility of the StuG III F is very similar to that of the Panzer III medium tank on which it is based. It is quite adequate for relocating and keeping up with other tanks.

The 7,5 cm StuK 40 L/43 is almost identical to the 7,5 cm KwK40 L/43 on the Pz.IV F2. It is one of the best guns in the game for its rank, combining excellent penetration, lethal APHE shells, high velocity, average rate of fire, and high accuracy, complementing the StuG's playstyle as a medium/long range tank destroyer. Unfortunately, the StuG III does not have the gun depression of the PzKpfw IV F2, and thus is not so good at taking advantage of terrain.

The StuK 40 also has access to an APCR round with excellent penetration, but its lethality is a lot worse than the APHE shell and it is very rare that the extra penetration is needed. The HEAT round is not worthy of consideration since its penetration is inferior to the APHE round's penetration at ranges up to 2,000 m. 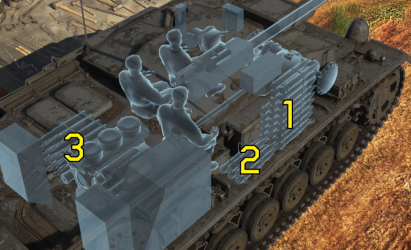 StuGs, with their thin side and top armour, should be careful of their position. If operating alone, StuGs should either move to the flanks in order to catch the enemy unaware, or operate behind friendly lines. Staying behind cover is preferable, although many rock formations will block the gun trajectory (whilst other tanks can simply shoot over them). Do always keep at least one flank covered, if the enemy is within range.

A particularly useful indicator is the Marder III. It features a similar gun, but are taller, and has a largely exposed crew. As a result of the latter, Marders are very fragile. If a Marder survives in a certain position, then the StuG is likely to do too.

The best tactic, of course, is to operate in cooperation with the team.

Operate in a squad with other StuGs, and at least one Pv.IV or Pz.III. They are taller, and might thus attract the enemy's attention, but draw fire away from the StuG for support while the StuG uses its powerful gun to destroy the enemy before it destroys the allied medium tanks.

When fighting without support, relocate after each shot as the StuG III is sufficiently mobile to evade detection often; also, if the team does not have air superiority, seek wooded areas, as otherwise any plane armed with 20 mm cannons can attempt to penetrate through the thin roof armour.

A StuG's best call in close combat should be constantly moving to keep the front armour of the StuG III F moving, especially the loader's side where there are ammunition present that a penetrating shot can detonate and knock out the StuG III F with a single shot. Many times a StuG III player may not move, thinking their frontal armour is invincible, and this is where many tanks are able to outmanoeuvre the StuG's turn rate and hit the vulnerable side.

On June 15, 1936, Daimler-Benz AG was ordered to develop a support vehicle mounting the 75 mm howitzer as its armament in a casemate structure with a traverse of 25 degrees. The vehicle was to provide full protection for its crew and be no taller than an average soldier. Daimler-Benz repurposed the chassis and running gear of their Panzer III design for the role. These new vehicles were named the Sturmgeschütz III (assault gun), or the shortened StuG III and the finished designs were sent to Alkett for prototype production and five were produced in 1937. These prototypes were made of mild steel and had the 75 mm StuK 37 L/24 cannon, an adaption of the original 75 mm KwK37 cannon on the Panzer IV. This gun would be featured on the StuG III variants Ausf. A to Ausf. E. The StuG III entered production from January 1940 to the end of the war on April 1945 due to the many upgrades done on the vehicle to increase serviceability and its low cost. At about a total production of 11,300 StuG III and its variants, the StuG III design was the most produced armoured fighting vehicle in German service.

The initial Stug III design was up-gunned to better combat these newer tanks. The original 75 mm StuK 37 was inadequate so like the Panzer IVs, it was given a 75 mm StuK 40 L/43 cannon. This variant was the Ausf. F and with its new cannon, could penetrate about 91 mm of armour inclined at 30 degrees at 500 m distance, being able to engage the Soviet T-34 designs. This upgrade changed the StuG III role from its usual infantry support role into a tank destroyer, though it can serve both roles with acceptable performance. The design was changed with an exhaust fan on top of the vehicle to vent out propellant fume that could accumulate in the tank from firing the cannon. An additional 30 mm of armour was welded on the tank to up the front armour from 50 mm to 80 mm in thickness. This, plus with the StuG III's low profile makes its concealment very easy to ambush tanks with its powerful 75 mm cannon. Some later models from December 1942 onward have the StuG III Ausf. F mounted the longer 75 mm StuK 40 L/48 cannon more commonly seen on the Ausf. G variant. Another redesign in 1942 had the StuG III chassis built from the improved Panzer III Ausf. J and Ausf. L with better rear armour protection and hull design. This redesigned variant was called the Ausf. F/8. About 616 StuG III Ausf. F and F/8 were produced from March 1942 to December 1942.

This up-gunned StuG III variant was better able to destroy Allied armours like the T-34s and the M4 Shermans. Another upgrade to the StuG III gave it the longer 75 mm StuK 40 L/48 cannon, and this variant was called the StuG III G.The vehicles were deemed very successful and attributed to more tank kills than any other armoured fighting vehicle in German service. The success of the StuG III urged Germany to prioritize the production of casemate structure vehicles built from chassis of other vehicles for further development in tank destroyers such as the Jagdpanther, Jagdpanzer 38(t), and the Ferdinand.

The StuG III design was also made into different variants with different armaments, such as a 105 mm howitzer on the StuH 42, a flamethrower on the StuG III (Flamm), and even a 150 mm sIG 33 infantry gun on the Sturm-Infanteriegeschütz 33B.