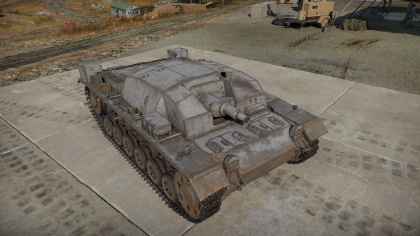 The Sturmgeschütz III Ausf. A (StuG III A) is a rank I German tank destroyer with a battle rating of 2.3 (AB/RB/SB). It was introduced during the Closed Beta Test for Ground Forces before Update 1.41. The StuG III A is the beginning of the StuG III line and the first enclosed tank destroyer for the German tree, it presents the same 75 mm gun as on the early Panzer IVs.

This tank destroyer was originally built as an assault gun, designed to fling low-velocity high explosive shells in the assistance of attacking infantry. Against armoured vehicles, however, the StuG should be used for frontal assaults on objectives or ambushes, due to poor accuracy at range and the high shell arc. In both roles, its low profile and excellent short-range firepower give a distinct advantage. You should get into cover when reloading. Due to the sloped armour on the top, shots will bounce more if you are on the same plane as the tank you are fighting or if your gun is facing the tank at 0° elevation. If you are raising your gun to shoot at an enemy he can pierce your armour easily below the gun.

The StuG will build up momentum slowly, allowing it to charge cap points effectively. The recommended method of attacking cap points in this machine is to keep you a building between you and the enemy tanks in the objective, approach at high speed. Once you have arrived, you should round the corner, aim(for about half a second) shoot and immediately reverse to take cover behind the corner you just rounded. Be careful not to expose too much of your tank during the reversing turn. Due to the StuG III being made from the Panzer III chassis means that it has inherited its brilliant speed and mobility. This either makes it perfect at 'Shoot and Scoot' tactics (I.e. Destroying a tank then changing position) or flanking/head-on attacks where your mobility can make you a hard target to hit. While the StuG lacks a turret it can turn on the spot very fast and has a decent gun arc, providing you have cover or able teammates which can negate the lack of a turret with the track traverse.

One of the huge disadvantages of the StuG is the lack of a turret that can traverse and unsloped side armour. The limited field of fire severely hampers the StuG's urban capabilities. The flank of the StuG is also unsloped and thin, making it extremely easy to penetrate if exposed. However, the StuG has a very low profile and good frontal sloping, affording it excellent protection when shooting from a gap in rocks or obstacles.

Overall the Stug III A is a early devastating tank to face were its pros out weigh its cons, the lack of turret is over looked when the combination of HEAT, fast mobility, quick reload and decent armor come in to play, getting this tank will help you through 2.3.

"Designs and samples of a self-propelled anti-aircraft gun built from a Pz. III began to be produced by the company Daimler-Benz AG in 1938. But only after the Polish campaign, which exposed the acute shortage of mobile field artillery in parts of the Wehrmacht, was the first production batch of machines launched, designated Sturmgeschütz III Ausf. A (abbreviated StuG III Ausf. A) in February 1940. The basis for the new machines was the Pz.Kpfw. III Ausf. F tank, which had a conning tower installed instead of the hull's superstructure and turret. The assault vehicle was armed with a short-barreled 75 mm StuK37 L/24 gun with 44 shells. The armor for the hull and the turret was increased by adding additional 20 mm armor plates. This resulted in a maximum armor thickness of 50 mm.

The StuG III became the most widespread specimen of German armored vehicles from World Wad II and proved itself well in battle. The vehicle's major drawback was its lack of a machine gun and the low muzzle velocity of its projectiles. As a result, the self-propelled gun was defenseless in close combat and against well-armored tanks. Therefore, the StuG III was only rarely deployed without supporting forces."