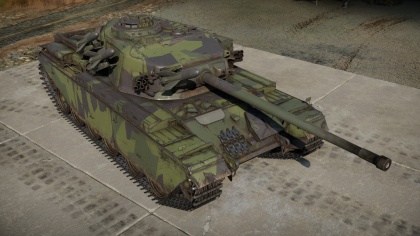 The ' (Full name: Stridsvagn 81 (Rb.52)') is a gift rank British medium tank with a battle rating of (AB), (RB), and (SB). It was introduced in Update 1.59 "Flaming Arrows". A Swedish import of the British Centurion Mk 3, it features an add-on of three SS.11 anti-tank missile on the turret. It uses the MCLOS guidance system (SACLOS in arcade mode), which means that the missiles must be manually guided by the tank movement keys to their target.