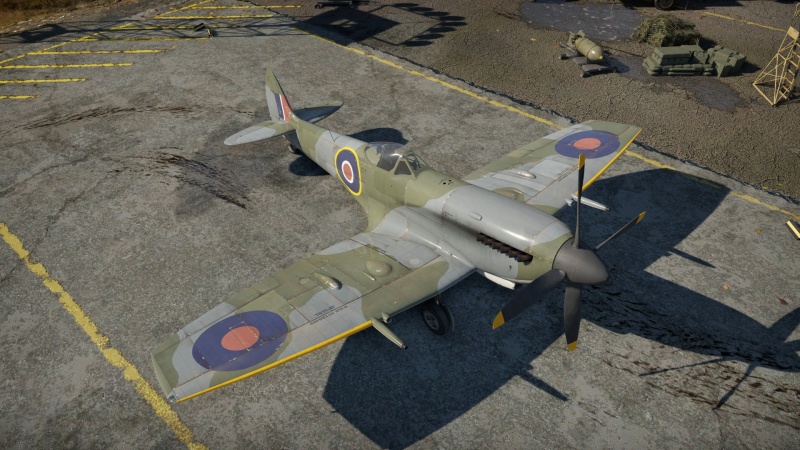 The Spitfire F Mk XVI is a rank IV British fighter with a battle rating of 4.7 (AB) and 5.0 (RB/SB). It has been in the game since the start of the Open Beta Test prior to Update 1.27.

The Spitfire F Mk XVI is a very unique plane with an awkwardly unique role and design. Virtually identical to the Spitfire LF Mk IX, aside from the clipped wings and bubble cockpit, the Mk XVI combines the low-altitude capabilities of the aforementioned fighter with the fantastic roll, dive, and speed capabilities of the German Focke-Wulfe 190 series.

The Mk XVI possesses all the characteristics of the LF Mk IX regarding armament and performance at low-altitude. Low-altitude climb acceleration is fantastic, the climb rate is very good, and armament is extremely effective. The main distinguishing feature of the Mk XVI is its clipped wings. These wings give the Mk XVI some distinct advantages- a great roll rate and amazing dive and level speed and acceleration. The roll rate makes evasion a very easy task- rolling manoeuvres can easily evade most tail-end attacks by any fighter in the 4.0-6.0 BR range. Even more, the clipped wings of the XVI provide for very good low-altitude speed and acceleration performance- this fighter climbs like a rocket and dives like a hornet below 1,500 m.

However, the clipped wings can provide some significant disadvantages to flying, as well. Compared to similar Merlin Spitfires the turn rate is far worse, higher-altitude performance is abysmal, and climb performance is worse, though marginally.

Weaponry is standard, except for the 2 x Browning M2 12.7 mm HMGs that replace the standard 4 x Browning .303 machine guns. As a matter of fact, the two M2s provide a significant increase in firepower. When equipped with Universal or Stealth belts they provide excellent "soft" ground target dispatching performance while proving effective as a last-ditch weapon. As with most of the Spitfire line, the Mk XVI possesses 2 x Hispano-Suiza Mk.II 20 mm cannons which are highly effective against most fighters, especially when utilising the "Air Targets" belt.

Thus, the Spitfire F Mk XVI is not a suitable Boom & Zoom nor high-altitude fighter; it works best as a low-altitude fighter-bomber that can effectively take out ground targets while providing good fighter cover. Boom and Run is by far the best-recommended tactic.

The Spitfire F Mk XVI is armed with:

The Spitfire F Mk XVI can be outfitted with the following ordnance: 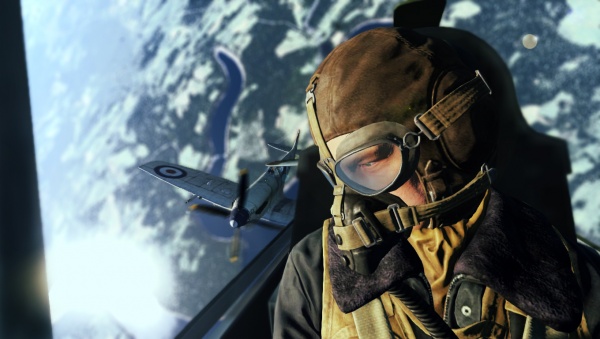 The Spitfire F Mk XVI is quite unique with its clipped wings. These give this version of the Spitfire a distinct advantage in roll rate, dive performance, and level top speed. However, they reduce the plane's ability to turn, and unlike other Merlin Spitfires this one is only average in its turning ability. Thankfully, it retains a good rate of climb, even if it is not as high as that of the unclipped Spitfire variants. In addition, the clipped wings reduce lift at high altitudes, so performance is best when closer to sea level.

Thanks to a great roll rate, this Spitfire is very capable in defensive manoeuvres, and although turn rate is decreased, the boost in roll speed make this a great dogfighter as well.

This vehicle maximizes its performance at low altitudes. Below 1500 m, it has an incredible rate of climb, very good top speed and acceleration, great dive performance, and generally outmatches its opponents. Still, there are some American and German planes that can outspeed and outdive this plane (especially since it locks up and may rip at high speeds), and the unclipped Merlin Spitfires outclimb this one.

This plane is equipped with 2 x 20 mm cannons and 2 x 12.7 mm machine guns. These are effective against fighters but may struggle against large planes such as heavy bombers. They can't destroy well-armoured ground targets, but can destroy lightly- or un-armoured ground targets and open top vehicles. Since all of these guns are wing-mounted, convergence should be kept in mind. A good convergence setting is usually between 300 and 500 m. Since cannon ammunition is somewhat limited, firing the 12.7 mm machine guns alone can be a good way to visualize the lead required to shoot enemies at longer ranges.

The Spitfire can also mount 2 x 250 lb bombs for destroying ground targets. These are quite small and must be aimed precisely to destroy the target. While this plane can be used in Ground Realistic battles, the fact that it can only carry 2 small bombs reduces its anti-ground capabilities. Instead, this plane can work as an air-superiority fighter in mixed battles.

The Spitfire F Mk XVI can rightly be considered a jack of all trades. It has some limited ground-attack capacity, decent guns, and flight characteristics that don't stand out in any one aspect. With a great roll rate; good dive and climb performance; and good energy retention, speed, and acceleration; this vehicle is a great low-altitude fighter as long as its weaknesses are understood.

The Mk XVI variant was very similar to the Mk IX; however, it was powered by a US-manufactured Packard Merlin 266 engine. A total of 1,054 Spitfires of this variant were produced. All production variants had the distinguishing feature of low-altitude clipped wings and a cut down rear fuselage and bubble canopy for increased visibility. The clipped wings increased the roll rate and top speed due to a reduction in drag, but sacrificed some of the fighter's rate of climb. This, coupled with an engine optimised for efficiency in denser air made the Mk XVI ideally suited to combat at lower altitudes.