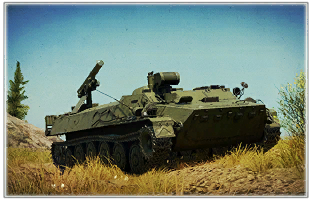 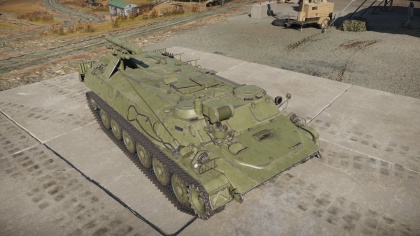 Pretty much every enemy tank in the game will be able to destroy the Shturm-S including rank 1 anti air. From the side within 200m the crew compartment can be penetrated by 7.62mm. There are very few areas on this tank that can be hit by a cannon round and survive. Given that this vehicle only has 2 crew and is susceptible to hull break with paper thin armor, generally avoid everything. Put a solid piece of dirt between you and the enemy and only shoot if the kill is guaranteed. You are protected from .50 cals from the front so if need be aim your front to an enemy who still has his heavy mg working. Artillery is especially lethal to this tank, so much so that the vehicle might as well be without armour.

The mobility is best described as nippy but not fast. Compared to Russian tanks of its BR it is faster but compared to other nations it is slower. The mobility hindrance in higher BRs is much more noticeable for the Shturm-S, being 50% slower than mbts such as the M1A1. The rear gear only goes up to 10 km/h meaning battle mode can be maintained in reverse. The Shturm-S lacks neutral steering meaning that turning around can take some time.

Vehicle is using ATGM launchers by using a special handle at its rear. Once the missile is fired, the handle simply discards them and picks up new one from inside of the tank. The handle is put down if the vehicle speeds up too much - if you need to drive around, use cruise control "combat," which goes forward at a speed of about 10 km/h.

Vehicle can carry up to 12 of missiles. It is best to choose next ATGM before firing the current one, because once the handle starts picking the next launcher up, it can't change payload choice or put it back.

Tandem HEAT - ATGM with double payload. Extremely high post-penetration damage. Designed to annihilate ERA and other countermeasures and then destroy the tank in one hit. Each payload can penetrate about 800 mm of armour.

In-game, the tandem missile seems to work this way: If missile hits something (for example, track or ERA), it explodes, destroying whatever was blocking the way, then secondary payload is fired in a line in front of ATGM tip, ignoring the first obstacle. If secondary projectile hits anything important, it tries to penetrate it and explodes. If it doesn't hit anything (first payload already hit the tank carcass itself) it just returns back to impact point and explodes there instead.

HE - A guided missile with a HE payload. Can penetrate about 55 mm of armour. Almost useless against medium and heavy tanks, especially in up-tier, but hull breaks or destroys light tanks, SPAA and can fatally damages other ATGM carriers. Although it has more penetration the projectile has less shrapnel to it's conventional shell counterpart.