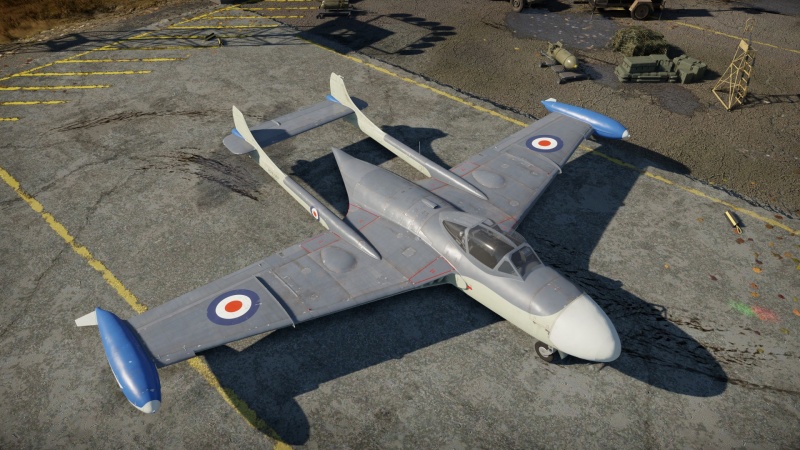 The Sea Venom FAW.20 is a carrier-based jet fighter located in the British naval line after the Sea Hawk FGA.6. The Sea Venom has very good diving characteristics, good roll rate making it a notable defensive flyer, and decent speed characteristics for a jet of its battle rating. It should be played as a Boom & Zoom aircraft, and it's very important to keep its speed up as the acceleration is somewhat lacklustre.

The Sea Venom is a relatively light jet but heavy compared to other planes it will face, specially prop planes. Despite the high agility of the venom compared to other jet, it is really mediocre agaisnt prop planes as most of them will outturn you within seconds. It maintains energy much better than it is to turn, meaning the Sea Venom should be flown as a Boom and Zoom plane rather than a turn fighter. Its acceleration is impressive compared to other jets and almost superb to even prop planes. It should be noted that the venom will lose a tremendous amount of energy when trying to turn fight a plane. Fighting at sea level is the way to go of this plane as only couple planes, like the MiG-15 will be able to catch you up. Be aware of jets like Sea Hawk Mk.100 as they have anti air missiles which will catch you up.

The engine is somewhat underpowered, so it is recommended to research compressor and engine modifications first for better acceleration and top speed.

The Sea Venom has a fully air fighting role as the lack of ordnance and penetration for the 20 mm cannons make the aircraft useless for CAS or ground attack. The Sea Venom has 2 primary combat roles, as well as 1 last resort:

The radar, speed, acceleration, and firepower make this jet usable for bomber hunting, especially when on cloudy maps as many planes at the BR lack radar. Pilots should use 30° climb to gain speed and altitude to be able to hunt bombers (always use aircraft carrier take-off when possible). Depending on the type of bomber that the Sea Venom encounters (jet bomber or prop bomber), tactics should vary.

Ar 234 B-2, Ar 234 C-3, IL-28 (all variants), etc, the pilot must try to use their agility to their advantage as most of them carry both offensive and defensive weaponry and sometimes will try to dogfight you (with exception of Ar 234 B-2 and B-57A). IL-28 should be aproached carefully as the 23 mm offensive and defensive cannons can tear the Sea Venom apart with small bursts. Use your speed to your advantage.

B-29/Tu-4, etc, the pilot must use boom and zoom tactics as big planes lack agility but have powerful firepower. These aircraft should be approached as any other prop bomber (head-on or from below). Be aware of B-29 and Tu-4 as both have ventral turrets that will harm you, approach them in a head-on or in a frontal arc of 45° (blind spot for most turrets) or in a very steep angle from above (although this should not be the main angle of approach as both B-29 and Tu-4 have a turret elevation of 89°).

This tactic should be a last resort when you are unable to take down any aircraft. The Sea Venom is a pretty easy target due to its small and tight cabin and small wingspan (although this can sometimes be beneficial) but can be used as bait for enemy planes for the same reason. Let friendlies deal with them while you grab their attention.

Further Sea Venom developments culminated in the production of F.A.W. 21 and 22 variants, respectively. These variants made improvements to the control surfaces and canopy; and incorporated upgraded ejection seats and American manufactured radar. The Sea Venom made great strides in safety in many areas, examples include the strengthened catapult and arrestor hook capability which increased the safety of take-off and landing; and the canopy advancements which allowed it to be jettisoned from the aircraft when submerged underwater. These were essential upgrades as the early F.A.W. Sea Venoms lacked any ejector seat at all which caused pilots great risk.[2]

Overall, 256 units of the de Havilland Sea Venom were produced and delivered to the Fleet Air Arm.[1]

During their service life, Sea Venoms saw significant combat. Their activity peaked with their involvement in the 1956 Suez Crisis, in which five squadrons of Sea Venoms conducted ground-strike sorties from their deployed carriers HMS Albion and HMS Eagle.[1]

Due to the all-weather nature of the aircraft, they were uniquely able to intercept jet bombers at night. Slight modifications to the breathing apparatus and oxygen distribution allowed the aircraft to reach these heights, though after the late mid-fifties they were decreasingly in consideration for interception duties.[3]

The Sea Venom is also credited with the first operational firing of Firestreak infrared guided missiles by a Royal Navy fighter squadron aircraft, after successfully destroying drone targets in an exercise off the coast of Malta in 1959.

After the Sea Venom’s retirement from carrier service in 1960, it was subsequently replaced by the de Havilland Sea Vixen. It was retired from ground service at RNAS Yeovilton in October 1970.[1]

The carrier-based Sea Venom FAW.20 fighter appeared as a version of the two-seater (seats for the pilot and radar operator) ground-launched Venom NF.Mk2 fighter, fitted with radar equipment. At the request of the navy, the base interceptor was equipped with an arrestor hook, a “folding” mechanism to store the wings for convenient storage on aircraft carriers, and a tail bumper to protect the tail unit from strikes on the deck. The aircraft completed testing and went into service with the “all-weather fighter” designation (FAW – Fighter, All-Weather).