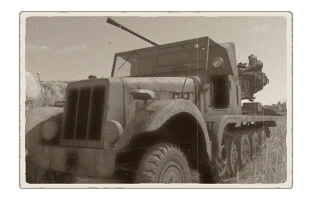 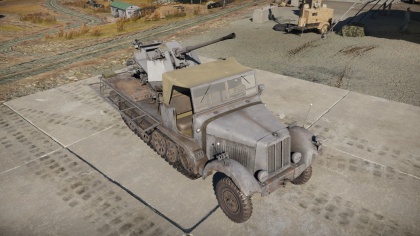 The 3.7-cm Flak 36 auf Selbstfahrlafette Sd.Kfz. 6/2 is a rank II German self-propelled anti-aircraft gun with a battle rating of 3.0 (AB/RB/SB). It was introduced in during the Closed Beta Test for Ground Forces before Update 1.41.

The 3.7-cm Flak 36 auf Selbstfahrlafette Sd.Kfz 6/2 is a halftrack-based anti-aircraft vehicle. With its 3.7 cm cannon, it can easily dispatch any aircraft given the circumstances. However, its gun (with APHE ammo) can also make it a very good improvised anti-tank vehicle. It has enough penetration to go through front armour of most tanks at its rank, and reliably cuts through side/rear armour and weakspots (even at some range), causing impressive damage.

Because it is based on a simple truck, it has no armour anywhere, and even machineguns can kill the driver inside, and crew manning the turret is completely exposed. However, it can be surprisingly durable at times, mostly because of inexperienced players attacking it with AP/APCR ammo, and often targeting all the wrong places, like the Engine, Driver sitting inside, or edges of the turret armour. It has mobility comparable to a lighter medium tank, and very good cross-country performance, because of its combined wheel/track chassis.

Being an SPAA, this vehicle is designed to shoot down airplanes. It was originally designed to follow alongside convoys, so to be used with other vehicles of the type. Its gun has a relatively low rate of fire for an SPAA, however, its shells pack quite the punch. Being a 37mm cannon, should it get a good hit, it will likely kill the plane. It also gets access to AP belts, which can be used against tanks. It can penetrate any medium or light tank of its rank (from the side/rear usually), but will struggle against heavier opponents like the KV-1. However, hunting tanks is not its job which is why it is not the best at that. 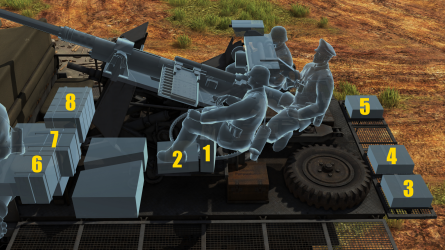 To use this machine to its fullest capabilities it is recommended to stay from areas of heavy combat, as you can be taken out very easily, especially by machine gun fire and HE shells. You should always stay behind friendly troops, but don't stay at spawn as it is most likely the first place enemy planes will go to drop bombs.

If you want to fight with the tanks, you'll definitely need to research APHE-only belts. Go forward with your teammates, but ALWAYS stay some distance behind them, avoid any open terrain, watch the battlefield situation carefully and wait. Use your speed to get out of any unfavorable battle condition. When you find a suitable target (No KV-1...), one good idea is to reverse around the corner turned sideways, with your gun aiming at the expected enemy direction. This maneuver exposes only half of your turret, and makes it possible to very quickly hide again behind the corner when needed. Your driver, engine and more than half of the vehicle remain hidden the whole time, significantly shortening the expose time and lowering the chance of being immobilised. Aim at sides of the turret, hull, or any other weak areas.

The 3.7 cm FlaK cannon was an anti-aircraft gun capable of fully automatic fire at a rate of 150 rounds per minute and is able to fire onto Allied aircraft up to four kilometers away. Multiple variants were made for the FlaK cannon from the 3.7 cm FlaK 18/36/37/43. The FlaK 18 was the initial variant with a dual-axle mount. The Flak 36 was a simplified variant with a lighter single-axle mount, the FlaK 37 has a simplified sighting system, and the FlaK 42 was the variant made for the German Kriegsmarine for their surface ships and U-boats. Of the variants, the FlaK 36 and 37 were the most produced guns

As the World War II progressed, the need for a mobile air defense capable of engaging low flying targets became urgent. German engineers attempted to fill this need by modifying vehicles to fit an anti-aircraft gun. The Sd.kfz.6 halftrack was modified with a new superstructure on the back, removing the backseats where the passengers would be. The superstructure allow the installation of a traversible anti-aircraft gun. The gun of choice for the Sd.kfz.6 was the 3.7 cm FlaK 36, the conversion for the vehicle was designated the 3.7 cm Flak 36 auf Selbstfahrlafette Sd.Kfz.6/2.

The Sd.Kfz.6/2 has the FlaK cannon mounted on the back, however there is no gun shield for the crew to provide small arms protection from the ground. Thus, ground support role for the vehicle was not a recommended role and is more best against flying targets. However, a modification on the vehicle by the crew to give protection against small arms and shrapnel. Ammunition for the gun was towed on a separate trailer towed by the half-track.