Difference between revisions of "Sd.Kfz. 140/1" 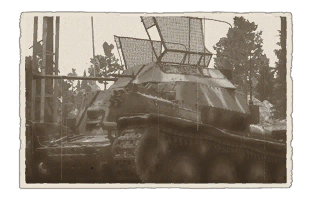 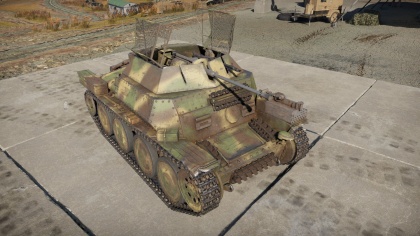 This vehicle is all-around better than the Flakpanzer I at the same BR in the tech tree. It has a 50mm front plate, a 30mm sloped turret, and four crew spaced out nicely.

Speed and P/W ratio are both superior to the Flakpanzer I, being 58kph forward, 6kph backward, and 15.45hp/ton P/W ratio.

This tank is equipped with the FlaK 38 (20 mm), which is one of the better low-tier guns. It has good HE for taking out planes, 46mm pen AP-I, and 64mm pen APCR. Unlike the Flakpanzer I, the APCR belt is full APCR instead of half.

This tank has a coaxial 7.92mm MG42 machine gun that is sufficient for hosing down flak trucks, but given that the main armament is already good at that job, a player will most likely never use this gun at all on this vehicle, unless jumped between reloads.

The Sd.Kfz.140/1 is simply better than the Flakpanzer I. Faster, more mobile, better-armored, not hull-breakable, better APCR belt, less wobbly suspension, and better survivability. It does the same job as its main tree brethren, flanking and taking out specific targets of opporitunity with the HVAP. Like the other two flackers, it cannot deal with B1 bis, B1 ter, or Valentine MkI at all, but otherwise it can shred everything it encounters.

"The Aufklärungspanzer 38(t) reconnaissance tank was based on the Pz.38(t) towards the end of 1943, by the BMM construction office in Prague. The order specifications required a 20 mm automatic cannon and a 75 mm regular cannon.

A Praga AE engine with 160 hp at 2600 rpm replaced the Praga AC. This required a change in the exhaust system and the introduction of a longer exhaust pipe, which, together with a muffler, was put on the tank's roof. The tank's hull received a new superstructure, with modified inclination and with riveted joints for its armor plates.

The open-top hexahedral turret, manufactured by the company Appelt, was equipped with a metal mesh to protect against hand grenades. The tank's armor thickness ranged from 8 to 50 millimeters. Its operational weight reached 9,750 kg. At this weight, its maximum highway speed was 52 kph, and its maximum highway range was 240 kilometers.

Its design was successful, reliable, and advanced. However, the rivet joints in its armor plating were a disadvantage."