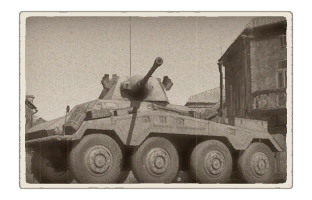 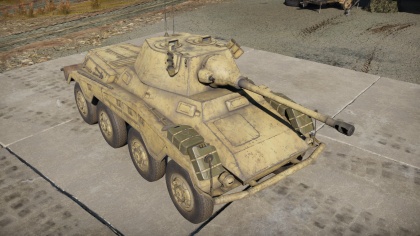 The Puma can reach a speed of around 45 km/h on flat terrain. Thanks to its transmission, it can drive in reverse with the same speed and maneuverability. Due to its wheeled design, it struggles in sand, snow and mud. It is also hard to keep going straight in a line at high speeds. The game does offer some degree of compensation for this via the "Activate Cruise Mode" control binding under the "Tank Driving" subsection. When using Cruise Mode, hold down the desired key you bound its activation to, and steer with mouse movements, allowing pinpoint steering while retaining speed. However, you cannot shoot while using Cruise Mode, so use it wisely.

The Puma fields the KwK.39/1 cannon, a similar cannon to that seen in the late Panzer III models, as well as the same ammunition. The cannon was designed for a anti-tank role and it does its job well at 2.7. It can select from a 95mm pen APC-HE shell, witch should be your main round, two APCR shells with 128mm and 150mm pen, respectively (you should carry a few of the better ones, especially if you uptier the Puma so it might see KV-1s, as well for long range sniping) and an HE shell witch can be used against AA trucks. As the APC-HE shell has no ballistic cap, it might struggle against angled armour, so it is best to go for side shots. With a reload of 4.1 seconds and high velocity shells, this tank can do the job both in close-quarters and at long range.

The Puma has a coaxial MG 42 that is only useful against exposed crew members.

Shermans also present the problem of sloped frontal armour. The M4A1 isn't as much of a problem, but the M4/M4A2/M4A3 variants are more difficult to penetrate. From the side, Shermans have flat armour and tall profiles. They are easy to destroy when flanked, but they too have exceptionally good mobility, especially cross-country, so they can prove to be even more of a pain to deal with than T-34s. They also have short-stop stabilizers and .50cals which make them even more of a threat.