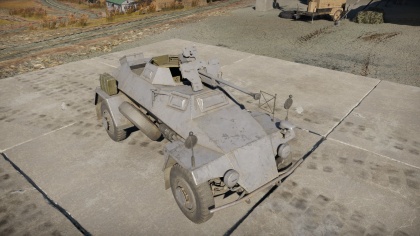 The le.Pz.Sp.Wg. (s.Pz.B.41) Sd.Kfz.221 is a unique vehicle in it's own right. This vehicle is a lightly armored, highly mobile car, with a 20mm squeeze bore cannon. What that means is that a 28mm wide shell is inserted into a 28mm wide breech, and subsequently fired down a barrel that narrows down to 20mm at the end. This gives you a projectile that was 28mm, now squeezed down to 20mm. In effect this gives you a heavier, longer 20mm shell. This allows old and outdated anti tank weapon calibers to be re-designed and revitalized so that they could be effective again.

The 28/20mm s.Pz.B.41 squeezebore cannon fires only one ammo type, the 2.8/2cm PzGr.41. The round has an extremely high muzzle velocity of 1400 m/s and penetrates 95 mm at 10 m distance against flat armour. Against 30-degree armour, it penetrates an acceptable 73 mm, but at steep angles it penetrates just 22mm. Rate of fire is excellent like most low-rank guns, but currently like all APCR, the post-penetration damage is poor.

The Le.Pz.Sp.Wg. (s.Pz.B.41) Sd.Kfz.221 can be played as a sniper, at medium to far ranges. Do not get in to close combat, as your gun only traverses to a very limited degree, and your minimal armor barely stops even rifle caliber machine guns. Artillery and aircraft are dangerous to you, as you only have two crew members, and one is almost entirely exposed.