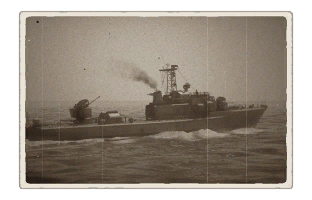 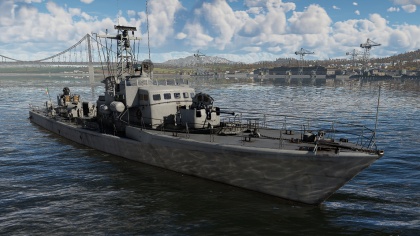 The Motocannoniere convertibili, MC 591 type, Saetta P-494 is a rank V Italian motor torpedo gun boat with a battle rating of 4.7 (AB/RB/SB). It was introduced in Update "Starfighters". As of Update "Starfighters", it is the only naval vessel in the game to be equipped with guided weapons.

The only armour on this vehicle surrounds the two 40 mm main cannons, which can be useful for keeping the guns operational when coming under fire. However, the rest of the vehicle has no armour protection.

The Saetta can survive a number of hits when dealing with gunboats, but higher-calibre cannons such as those on destroyers will have no trouble sinking it.

The Saetta has the highest top speed of any tier 2 italian boat. With such speed, it is often able to reach desirable locations on the map before the enemy is able to.

The guided missile is the Saetta's most unique feature. This missile can be used to attack ships quite effectively (usually it can destroy smaller vessel in one hit), and is also very capable of destroying enemy aircraft, thanks to its proximity fuse. When using the missile, remember that the launcher cannot point directly forwards, and that the enemy must be near the sides or rear of the vessel before a firing solution is achieved. Also keep in mind that the missile is not very fast, and that it takes a considerable amount of time to reach the target.

As for the main cannons, the Saetta's 40 mm Bofors are great for dealing with smaller boats. They can be used to sink destroyers, but it will usually take a considerable length of time to do so. The Saetta is equipped with a radar, and has a lead indicator for use in an anti-air role. The lead indicator, when used with the vehicle's 40 mm cannons, makes dealing with aircraft a breeze.

This vessel has quite a high top speed, and is often able to reach favourable positions on the map before the enemy. This speed can also be used to help the vessel outflank the enemy and take them by surprise.

Since the Saetta is unable to survive more than a few hits from an enemy destroyer, it is recommended to stay away from their firing lines, and to keep to cover if possible. Certainly, it is almost never a good idea to engage an enemy destroyer at ranges above one or two kilometres.