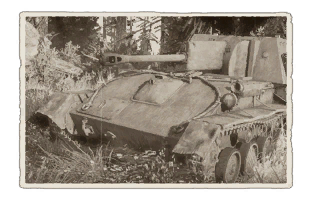 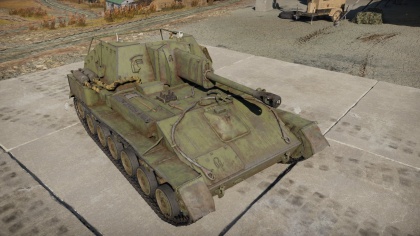 The SU-76M is a rank I Soviet tank destroyer with a battle rating of 2.0 (AB/RB/SB). It was introduced during the Closed Beta Test for Ground Forces before Update 1.41.

Therefore, it is crucial to remain at a distance from the enemy, perhaps even seek the cover of trees for protection against low-level attack aircraft, and to only ever give the front side to an enemy. The fact that this vehicle does not have a turret not only means that it is not effective when fighting more mobile enemies attempting to flank, it also means that placing your armour at an angle is not a viable strategy to increase relative armour thickness and stay more protected, since the gun's limits for horizontal traverse mean that any significant angle of the hull towards an enemy will make it harder to keep the enemy in sight. What can be done is to fire a shot and, immediately after, angle the hull whilst reloading, to then return to facing the enemy to fire another shot. However, hiding whilst reloading is the most sensible choice.

Unfortunately, the SU-76 has fairly poor mobility, handling, and a vastly different gun when compared to its smaller and more mobile cousin, the Zis-30. You could compare the Zis-30s gun to a nail. Its gun will pierce through anything at its rank, making most tanks armour seem like paper, but sometime its internal damage will be minimal and confined to the area that it penetrates. The gun on the SU-76 is more like a hammer. The sheer force of the shells will cause huge amounts of trauma to a target upon penetration. The SU-76 is also better armoured than the Zis-30 and provides much more protection to the gunner crew, especially from smaller calibre rounds (Unless fired from the rear). Given its poor gun depression and velocity, the SU-76 should be used as a mobile brawler and ambusher. It is well suited to performing ambushes in urban areas. The high HE filler of the 76mm shell makes it capable of OHK'ing nearly all enemy armour at its 2.3 BR. A minor issue with the SU-76 is that it has no defensive machine gun, meaning that responding quickly to SPAA is difficult.

The gun in itself is what makes the SU-76M a good vehicle, all its other characteristics are less than impressive. The variety of ammunition is a definite pro for this SPG, its APCR and HEAT shells being effective even at higher ranks, giving this humble tank destroyer the ability to down high-tier tanks like the Tiger H1. Recently, the much more effective late-war BR-350B ammunition has been added to the SU-76M's ammunition options. It features noticeably more penetration and a better fuze in exchange for somewhat less explosive mass. Despite this, you will often destroy most enemies in one shot when you penetrate. Once unlocked, the SU-76 is quite capable of dealing with any tank it is likely to see from the front, though you may have to swap ammunition often to deal with different targets.

The situation changed after the German invasion in 1941, and vehicles such as the SU-152 or SU-122, based on the KV-1 and T-34 tanks respectively, were developed. In November 1942, the State Defense Committee then ordered the production of a light self-propelled gun, built on the chassis of a light tank and armed with a 76.2 mm gun. The T-70 light tank chassis was chosen, as the other light tanks, the T-50 and T-60, was already out of production. The chassis had to be modified for this role, so it was lengthened and had one additional pair of road wheels added to the design. The armament, the 76.2 mm divisional M1942 gun (also designated ZiS-3), was mounted in a fully enclosed casemate. The gun was positioned at the rear, with the transmission being mounted frontally. The vehicle was designated SU-76 (Samokhodnaya Ustanovka, “Self-Propelled Gun“), and the production was issued to the No.38 Factory in Kirov and started in December 1942. However, after only a couple of hundred vehicles were produced, the production was halted due to serious mechanical problems and other issues. The power train consisted of two GAZ-202 automobile engines, with each powering one track. However, there was no synchronization gear, so the driver has to control both engines simultaneously, which was an extremely difficult task. This arrangement also caused strong vibrations, which were the cause of frequent engine and transmission failures. The second biggest issue was the enclosed crew compartment, as it was very cramped and offered only a little space for crew members to work properly. The vehicle thus had to be modified, firstly the roof of the crew compartment was removed, improving the access to the gun. The power train was also changed, receiving the more powerful GAZ-203 engines, each producing 85 horsepower, which was now mounted in tandem on the right side of the vehicle, propelling a single drive-shaft. The modified vehicle was designated SU-76M, and its production was resumed in early 1943. More than 14,000 SU-76M’s were produced between 1942-1945, making it the second most produced armoured vehicle in the Soviet Union after the T-34 tank.

In its intended role, the SU-76M replaced earlier infantry support tanks and was very welcome to Soviet infantry units as it provided them with a light and mobile universal support weapon. The vehicle was meant to be part of three battlefield roles - a light assault gun, a mobile tank destroyer, or a mobile artillery gun as the weapon could be fired indirectly at a range of 17 km. The vehicle was fairly lightweight and produced low ground pressure, enabling it to pass through terrain unsuitable for heavier vehicles. Its gun could utilize a multitude of ammunition types, aside from standard high explosive ammunition, it could use fragmentation, shrapnel, incendiary and smoke rounds. As a tank destroyer, the gun was sufficient against German light and medium tanks such as Panzer III or Panzer IV. The introduction of the APCR and HEAT rounds then enabled SU-76M units to engage even heavier Panther and Tiger tanks with some success, though crew manuals instructed the gunner to try to hit the tracks or gun barrels before these rounds were made.

"The SU-76M was created based on the T-70M light tank as a mobile infantry escort. In the front of the vehicle, the driver was seated on the left and the engine compartment was on the right. The fighting compartment was in the rear of the vehicle, in a cabin open at the top and partially open at the rear. The vehicle's crew consisted of 4 people. The vehicle's commander and loader sat on the right of the armoured cabin, and the gunner sat to the left of the cannon.

The SPG was armed with a 76.2 mm ZiS-3 cannon. Placing the cannon in an armoured cabin simplified the production of these SPGs in comparison to manufacturing tanks, and allowed for them to be produced in a higher overall quantity. In 1944, when armoured vehicle production in the Soviet Union reached its height, around 25% of the overall number of full-track combat vehicles manufactured were SU-76Ms.

The No. 38, No. 40 and GAZ factories mass-produced these vehicles. By 1945, these factories had produced 13,932 SU-76Ms in total. Consequently, the SU-76M became the most prolific Soviet SPG in World War II.

Vehicles of this type were widely used in combat operations both as infantry support vehicles and as tank destroyers against enemy light tanks, medium tanks and SPGs. With different types of ammunition at hand, they were able to overwhelm infantry, artillery and armoured targets alike. A subcalibre round from the vehicle could penetrate 100 mm armour from a distance of 500 metres.

These SPGs gained an excellent reputation in battle. As a vehicle of its class, the SU-76M was practically equal in all regards to its foreign counterparts. After the war, the vehicles served in the Soviet Army until the beginning of the 50s, and in the DPRK army throughout the 50s."