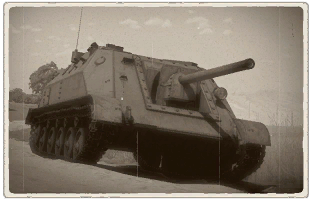 The SU-76D has almost no armor to speak of, and can only survive one or two shells before getting knocked out. Because of this, it should be played like a light tank. Also, its roof armor is enough for 50. Caliber Machine guns to penetrate. Luckily it has a relatively low profile so getting hit is a bit harder, and it can sustain mg fire. if an AP shell is fired, there is a chance only one or two crew members will die, Which is acceptable. But, the loss of 3 crew members will end in a crew knockout.