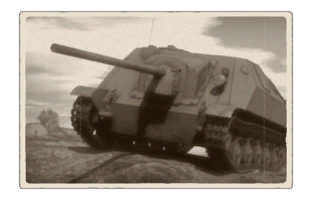 This tank destroyer uses a 57 mm ZIS-4 for its main gun. It features a low profile, good top speed (40 km/h in RB) and great penetration for its rank, but weak armour on all angles. It is the first tank destroyer available at rank III for the Soviets available.

The overall design of the SU-57B allows for sneaky attacks, revolving around the 57 mm ZiS-4 gun that allows for engagement from medium range on unsuspecting enemies. Because of its low profile, this TD can use bushes and terrain to hide its approach. However, the trade-off is lackluster mobility, so it compares with the ZiS-30 that provides better mobility and speed and can reposition much faster. Despite all these limitations, when played right the SU-57B can score good scores, but only when properly positioned and not detected.

The SU-57B has the best armour on the front (25mm), weaker armour on the sides (16mm) and weak on the rear (16mm). Regarding the crew protection, because of the number of crew members (4), the loss of 1 or 2 crew members is acceptable. But due to the thin armour (25mm front, 16mm sides and rear), the SU-57B can take one or two shots maximum before being put out of order. It is much better protected than the ZiS-30 and can sustain MG fire.

The main gun is ridiculously powerful for its hull. It features a ZIS-4 57mm that has a penetration rate similar to the ZiS-30 main gun. The position of the main gun is quite low and enemies will have a hard time detecting the silhouette of the tank. However, because of its long barrel, one must be careful not to stand out from cover or from the sides.

The SU-57B is purely a tank hunter. With its 57mm ZIS-4 gun, and at a BR of 3.3, it can easily pierce almost any opponent in the game. Because of its weak armour, it is not capable of engaging too close and had to stay at a medium to long range.

With only 25 mm frontal armour at best and 16mm on the side and virtually none on the rear, a single shot would be fatal and leave the crew disabled at best. It is even susceptible to heavy MG fire from the sides and rear. 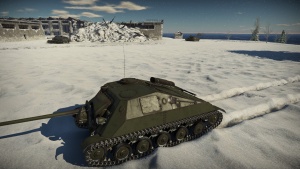