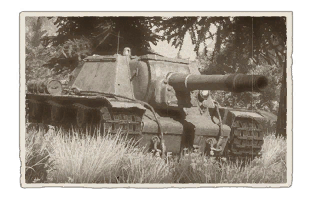 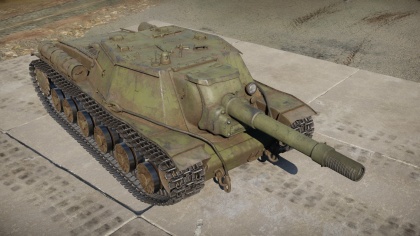 The SU-152 is a rank III Soviet tank destroyer with a battle rating of 4.3 (AB/RB/SB). It was introduced during the Closed Beta Test for Ground Forces before Update 1.41. This vehicle was created on KV heavy tank chassis. It carries the powerful 152 mm ML-20S howitzer. 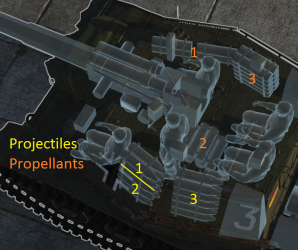 The SU-152 is a tank destroyer that serves many different purposes; the most accurate way to observe this vehicle is as somewhat of a "big brother" to the SU-122 and as the "cousin" of the KV-2. However, this vehicle features many differences from its closest predecessors. For example, the SU-152's BR is higher without any noticeable gain in firepower over its relatives. This presents a problem as the SU-152 will no longer be able to perform its trademark "one-shot" hits with the high-explosive rounds as often. However, unlike the other vehicles that fill the same role, the SU-152 gains access to highly effective armour piercing high explosive (APHE) ammo. This is the pinnacle of the SU-152's effectiveness. Nonetheless, turret shots with HE shells are still a viable option in combat. Due to the vehicle's BR, players are more likely to know and counter your strategy. Thus, the 152's new armour piercing rounds may come as a rude surprise.

The biggest threats you will encounter at any point whilst playing the SU-152 are enemy tank destroyers. The dreaded Panzer IV-derived tank destroyers pose a significant threat; they can punch through the SU-152's armour at ranges of more than 1000m with the L70 gun while remaining at the extreme edge of your own effective firing range. Another frequent threat are the M10 and M18 tank destroyers. Boasting both range and speed, these machines can either destroy you from distances that you cannot hope to match or completely avoid your fire while still creeping closer. The final threat to this TD is actually centred on the vehicle itself: an extremely long reload time that leaves little room for error. One missed shot from within your enemy's effective firing range can mean your undoing.

"This SPG was put into production and service in February 1943. It holds a unique record in that the design and construction of its prototype model took only 25 days. The vehicle was created based on the KV-1S tank. The powerful 152 mm ML-20 howitzer-gun's elevating mass with a 28.8 calibre barrel length was installed practically unaltered in its frame. Its crew of five were housed in a specially designed fighting compartment.

The vehicle's hull and cabin were welded from rolled armour plates of 20, 30, 60 and 70 mm thickness. The gun mantlet was 60 mm thick. Its direct firing range came to 3,800 m, and its maximum range was 6,200 m. The howitzer-gun's rate of fire was 2 shots per minute. The vehicle's ammunition complement consisted of 20 separate loading quick-fire shells.

The self-propelled gun was mass-produced in February-December 1943. In total, 670 of them were made. The SU-152 turned out to be a very effective means to combat heavy tanks. These vehicles' shells, weighing 48.8 kg each, easily penetrated Tiger and Panther armour and ripped off their turrets. This lead front-line soldiers to affectionately dub it Zveroboy (one who fights beasts/animals).

Thanks to its combination of mobility and high firepower, the SU-152 was used in three separate roles: assault weapon, tank destroyer and self-propelled howitzer. However, the weapon's low rate of fire and elevation angle along with its closed fighting compartment significantly hampered the vehicle's effectiveness. The SPG's other disadvantages were the absence of a defensive machine gun, its insufficient frontal armour for 1943 and its crowded fighting compartment. The lack of forced draught ventilation in the fighting compartment, particularly when the engine stalled, often lead to the crew suffocating during firing operations."

Camouflages and skins for the SU-152 from live.warthunder.com