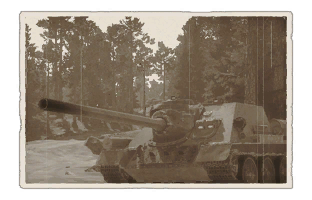 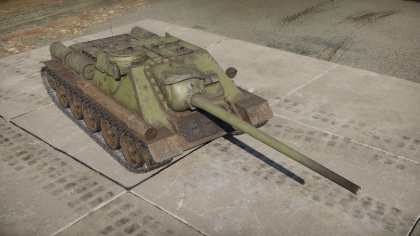 The SU-100 is a Rank IV Soviet tank destroyer with a battle rating of 6.3 (AB/RB) and 6.7 (SB). It was one of the first vehicles introduced in the opening of "Ground Forces" in Update 1.41. Featuring the 100 mm gun with a strengthened design from the SU-85, the SU-100 can prove a menace to anyone on the other end of its gun.

The SU-100 is a classical casemate tank destroyer and as such has a fixed forward gun for its main armament, not too unlike the SU-85(M) tank destroyers. This gives the SU-100 a preference towards a defensive playstyle than an offensive one. As such, it is best to play the SU-100 in a supporting role, firing at distant enemies and ambushing them rather than facing them head-on. The SU-100 boasts high firepower and long effective range due to its 100 mm armament. The gun is able to penetrate armour similar to the 122 mm on the IS-2, but also a faster reload rate while retaining suitable post-penetration damage to devastating enemy tanks. As such, the SU-100 can lay in wait hidden in an open field and confidently attack enemies up to 1,000 meters away.

The SU-100 does not look very different from the Rank III SU-85M tank destroyer, the only big external difference is the large 100 mm D-10S gun extending from the body, significantly bigger than the 85 mm D-5S gun. Though external difference is minimal, the performance in-game is big enough for a whole rank. The 100 mm gun boasts penetration levels along the line of the 122 mm, but with much faster muzzle velocity and reload speed. Aside from that, everything else is the same as the SU-85M. Gun elevation and depression is the same as +20°/-3°. The armour on the SU-100 is 75 mm sloped frontal armour. The engine and weight are also the same.

With all these similarities, those familiar with the SU-85 series will feel at home with the SU-100, with the exception that a majority of the enemies in the BR bracket can effortlessly knock out the SU-100 with even a glancing shot.

The SU-100, as a Rank IV vehicle with a battle rating of 6.3, can be effortlessly defeated by a majority of the enemies faced at the BR bracket. As such, it is most important that the SU-100 makes the first, damaging shot before the enemy could get a shot first.

In its introduction in the last few months of World War II, the SU-100 proved to be a very successful tank destroyer. The 100 mm D-10 gun could penetrate 125 mm of armour at 2,000 meters away, against the Panther, it could take it out from 1,500 meters away easily. Most of the SU-100 in service saw action in Hungary in March 1945, most notably in the German offensive Operation Frühlingserwachen (Spring Awakening). Although never intended for infantry support, the SU-100 even saw action in the Battle of Berlin in the close-quarters combat of urban warfare as its 100 mm gun was very good against heavy fortifications, but the lack of any machine guns has the vehicle work in cohesion with infantry or aircraft.

"In connection with the increased armour of new enemy heavy tanks, it became necessary to create a self-propelled gun more powerful than the SU-85. Mass production of a new SPG under the designation SU-100 began at UZTM in August 1944. The engine, transmission, undercarriage and many other key parts from the T-34-85 tank were used in its design. It was armed with a 100 mm D-10S cannon with a 56 calibre barrel length. This weapon perfectly combined a high rate of fire with good ballistic characteristics. Its armour-piercing shell could penetrate 160 mm thick armour from a distance of 1000 metres. The vehicle had a standard design, with the driving compartment in the front, the fighting compartment in the middle and the engine compartment in the rear. Above the commander's place, the cabin's roof contained a fixed command cupola with five observation slots for all-round visibility. The command cupola's hatch housed an MK-4 observation instrument and rotated on a bearing.

The SPG was manufactured between 1944 and 1947, and 2,495 SPGs of this type were produced during the Great Patriotic War. The SU-100 was first deployed in battle in January 1945. The SPGs showed their worth and earned a reputation as a reliable and powerful combat vehicle. The vehicle also inherited negative aspects from its base tank, such as its outdated suspension construction, its fuel tank positioning in the fighting compartment, and its unfavourable layout for an SPG. The SU-100's barrel length was even greater than that of the SU-85, making manoeuvring difficult on rough terrain and in urban areas. After the war, the vehicle was modernised numerous times and remained in service in the Soviet Army for several decades. These SPGs were supplied to the USSR's allies and took part in a range of local post-war conflicts."

Camouflage, skins and paint patterns for the SU-100 from live.warthunder.com