From War Thunder Wiki
Revision as of 22:09, 16 May 2019 by bangerland (talk | contribs) (i think i realized why i thought of the mechanic in such way. It is because i looked at ammo rack picture and forgot that at some patch the mandatory turret ammo rack was added, making many turreted tanks oneshottable.)
(diff) ← Older revision | Approved revision (diff) | Latest revision (diff) | Newer revision → (diff)
Jump to: navigation, search
RANK 6 SWEDEN
CV 90105 TML PACK
BUY
ST-A1 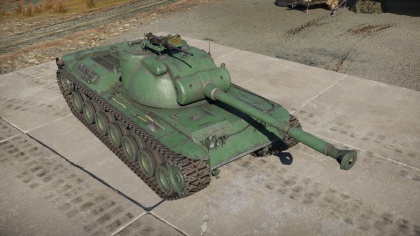 When facing the ST-A1, the left side of the turret holds the gunner and commander, the right side holds ammo, so a well placed shot into the turret will result in a catastrophic explosion, or, at the least, double crew knock out with a solid shot. If unable to shoot the Gunner out, the Breach which is the largest thing in the turret will do as the repair is close to 1 minute (or less depending on the crew) giving enough time to reload and finish off the tank.

However, in AB if all of turret crew members get knocked out, the "last stand" is very forgiving and tank seems to soak damage as if gunner isn't even present in the turret. As long as player doesn't take full ammo load and spends all of their pre-loaded ammunition , the turret can tank pure AP shots and HEAT, likely only losing the gun breech, making tank hard to destroy from a distance, especially from the left side, as long as hull isn't hit, or turret got shot directly with APHE or HESH, though tank performance is decreased drastically, so it cannot fight at close range with more than 1 tank like this.

While gun perform at acceptable level at it's BR, it requires "Adjustment of fire" upgrade unlocked as soon as possible, as well as ammunition upgrades. This is due to the base ammunition being pure AP and also low quality, so it's unsuited to fight other tanks at long range, and so you have to unlock better shells as soon as possible.

Stock : Able to fight light tanks and some medium tanks, but generally at about 500m, because gun misses a lot, and even if you hit it may ricochet. Attacking heavy tanks is really not recommended, as it's entirely up to random if they take any damage.

APHE and adjustment of fire: Able to fight Heavy tanks of your own BR like IS-2 or Tiger II (P) by firing at their frontal turret weak spot at relatively close range and snipe certain medium tanks, although anything of higher BR like Centurion Mk 3 should not be attacked directly, as they tank your shots frontally. A lot of tanks will still bounce your long-range shots, because APHE flies at a high angle since 700m, and in up-tier a lot of heavies will pretend you do not exist even up-close. However, you can take flanking snipe routes and use your high level zoom to snipe them from great distance into their sides, as APHE, unlike normal AP, will definitely destroy their entire tank for you, as long as it penetrates.

APCR and elevation mechanism: Many will be puzzled by tank having 2 different APCR, but the idea is that M304 does more damage along the way, but loses a lot of energy due to higher angle of attack, while M332 flies at a more straight angle, allowing to breach heavily armoured tanks at longer distances with lesser probability of lucky ricochets, but has lesser mass (and thus damage). Because of this, they are doing same damage, but M332 is easier to aim and has favorable angle of attack. it may still one-shot crammed tanks, if you shot straight through the middle of them or aim for the crew specifically. Most of enemy heavy SPG and some up-tier superheavies will still ignore your shots and one-shot you back, so you will find yourself constantly using both APHE and APCR, trying to adapt to your current enemy.

HEAT-FS: With M348 unlocked, you can now simply destroy T-44 by firing at left of their tank (right for you if head-on) and IS-2 by firing straight at the middle of their hull. You also can destroy all the enemy SPG and heavy tanks which were bullying you this entire time from any range, for example you can destroy Jagdtiger with two shots by crew knockout, destroy T32E1 which is normally a pain to hit into hull weakspot with APHE even with X16 zoom, and, if playing AB, you can now destroy superior Leopard I without any issues. It's worth remembering though, that certain rare tanks like Centurion Mk.5 AVRE and T95 are highly resistant to HEAT or just damage in general, requiring you to aim very well or retreat, and HEAT often explodes if touches anything on it's flight path, so kinetic shells are still required.

Machine guns of ST-A1 can be used to destroy super light SPG like M56 and 12 mm MG is capable of destroying AUBL/74 and similiar vehicles. They also can be used to fire at planes, though the damage is minimal.