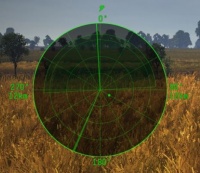 Section is to be filled properly.

When you use any vehicle with fully functional radar, you will see these 2 things on your screen: